Sotheby’s Hong Kong auction will take place on 13 October 2007 at 3pm HKT (8am GMT) and there are plenty of interesting lots to browse online before bidding begins in earnest. Among this year’s collection there are some stellar watches from the biggest designers on the planet. They not only look stunning but are also some of the rarest and most sought after watches on the planet.

Here are just five of the best on show during the October auction: 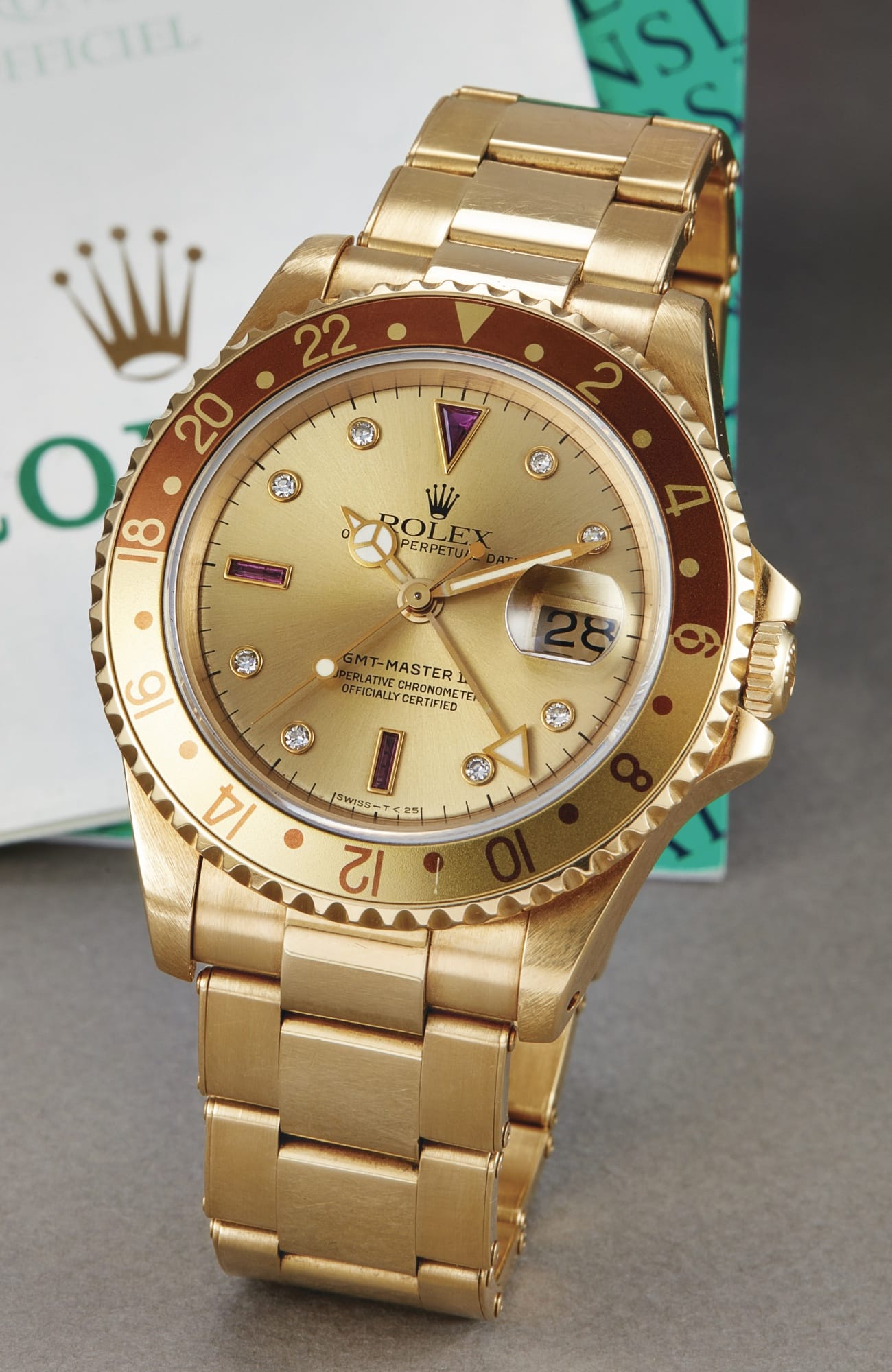 Nothing suggests luxury more than a Rolex and this gold, bejewelled watch from circa 1991 is no exception. It’s simply a stunning creation that should get a lot of interest at the auction. There are 31 jewels on the face – a delicate mix of diamonds and rubies – and the crowning glory is the 18 carat gold case in which the mechanism is set, matched by a Rolex Oyster bracelet. It’s a stunning example of the Rolex GMT-Master II and you can expect it to fetch between £14,000 and £22,000 on the day. 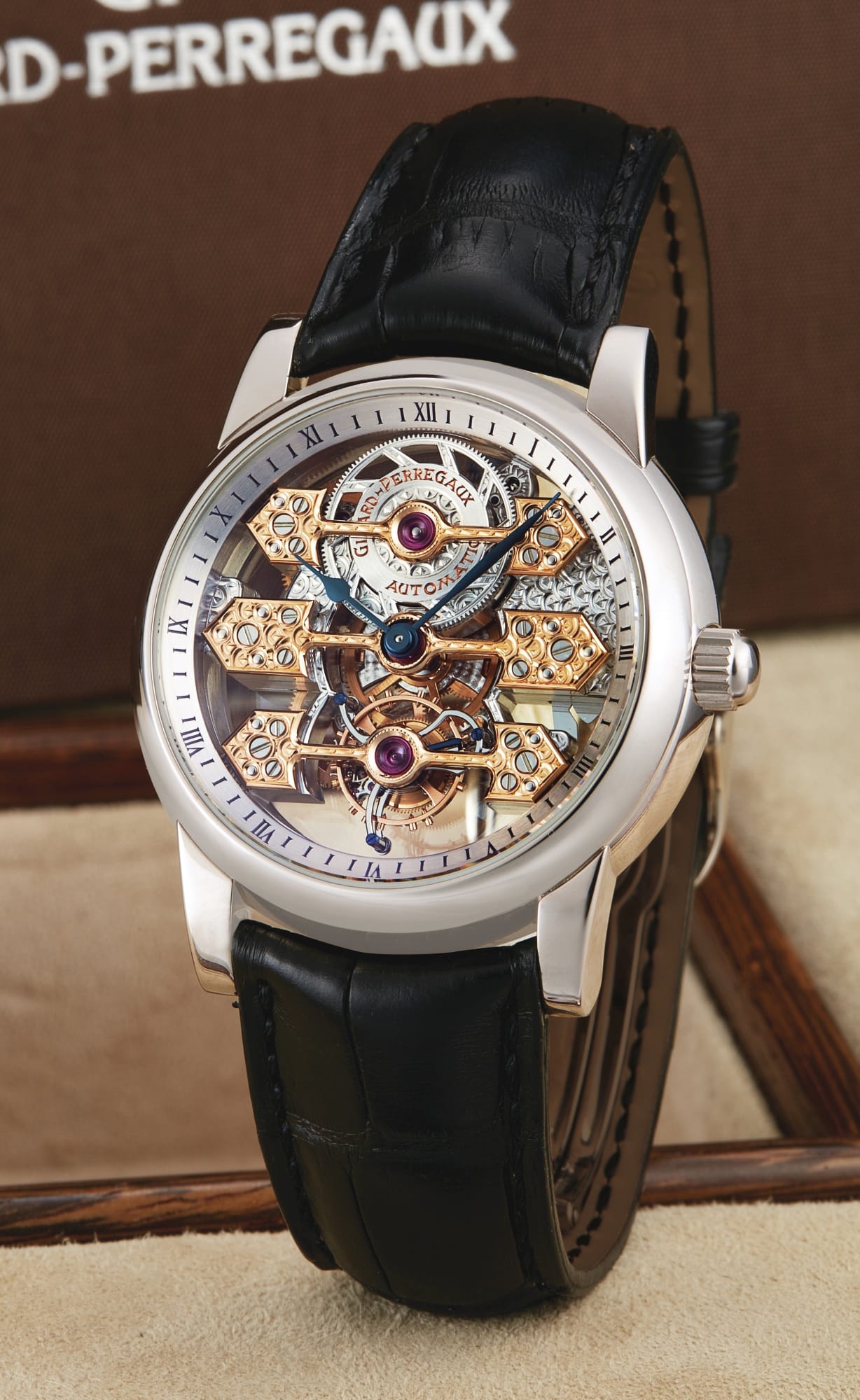 This is certainly a watch that focuses as much on its looks as its functionality, taking the much vaunted skeletonised design to a much higher level. Ignore the No. 19 Tourbillon carriage and GP9600S automatic nickel lever movement, the big attractions are the three elegant bridges in pink gold across the face which give this watch such a unique appearance. With an 18 carat white cold case and black leather strap, this is certainly one watch that is going to get you noticed. Expect offers of between £40,000 and £60,000 at the auction. 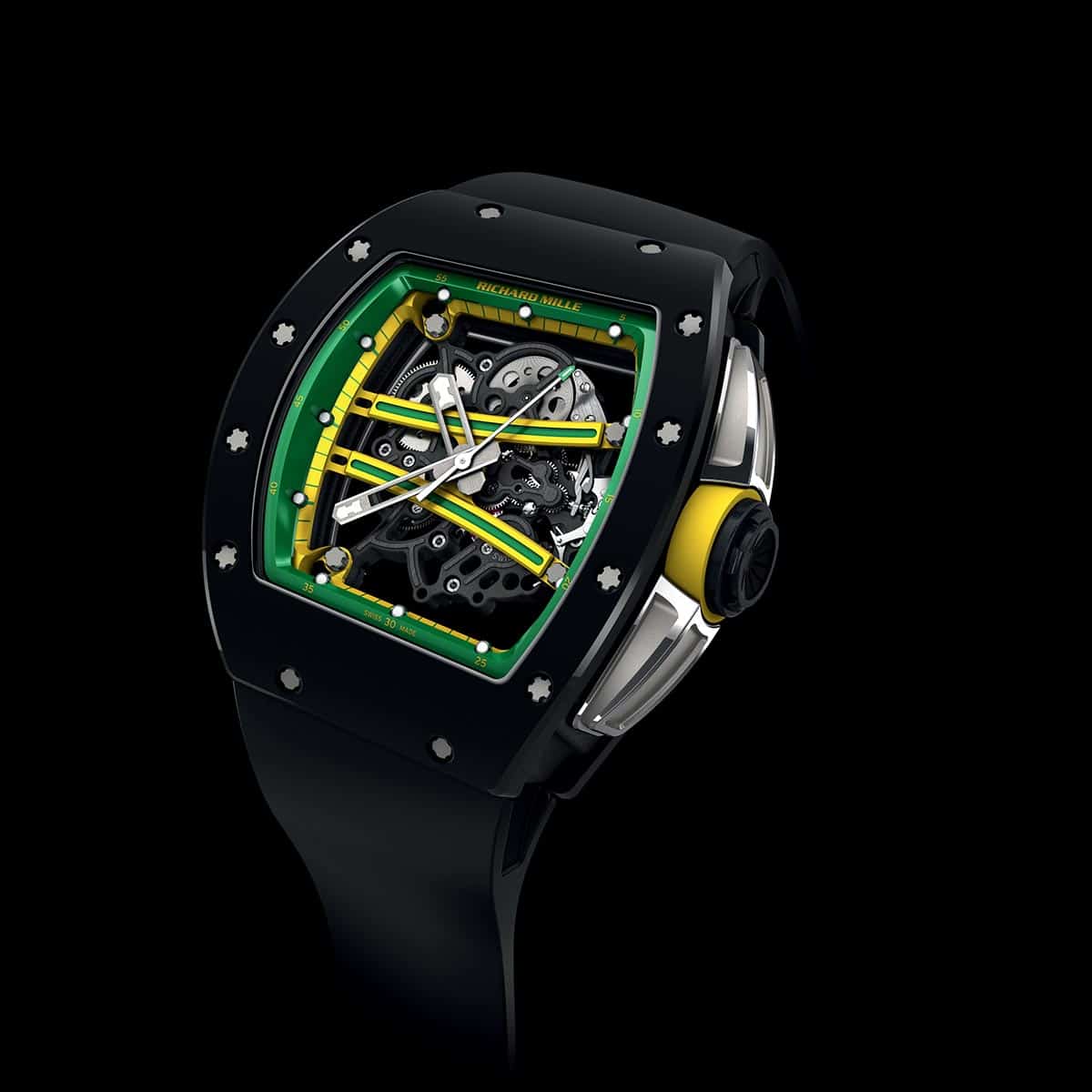 Synonymous with modern watch design, this rare example of Richard Mille’s work is certainly going to catch the eye at the Hong Kong auction in October. With a RMUL2 manual winding movement and 24 jewels, the watch was designed in collaboration with Jamaican sprinter Johan Blake for 2014 and released as a very limited edition. It’s the kind of design that is going to attract bidders who love a sports watch that really has some style. Sotheby’s put the estimate at between £62,000 and £90,000. 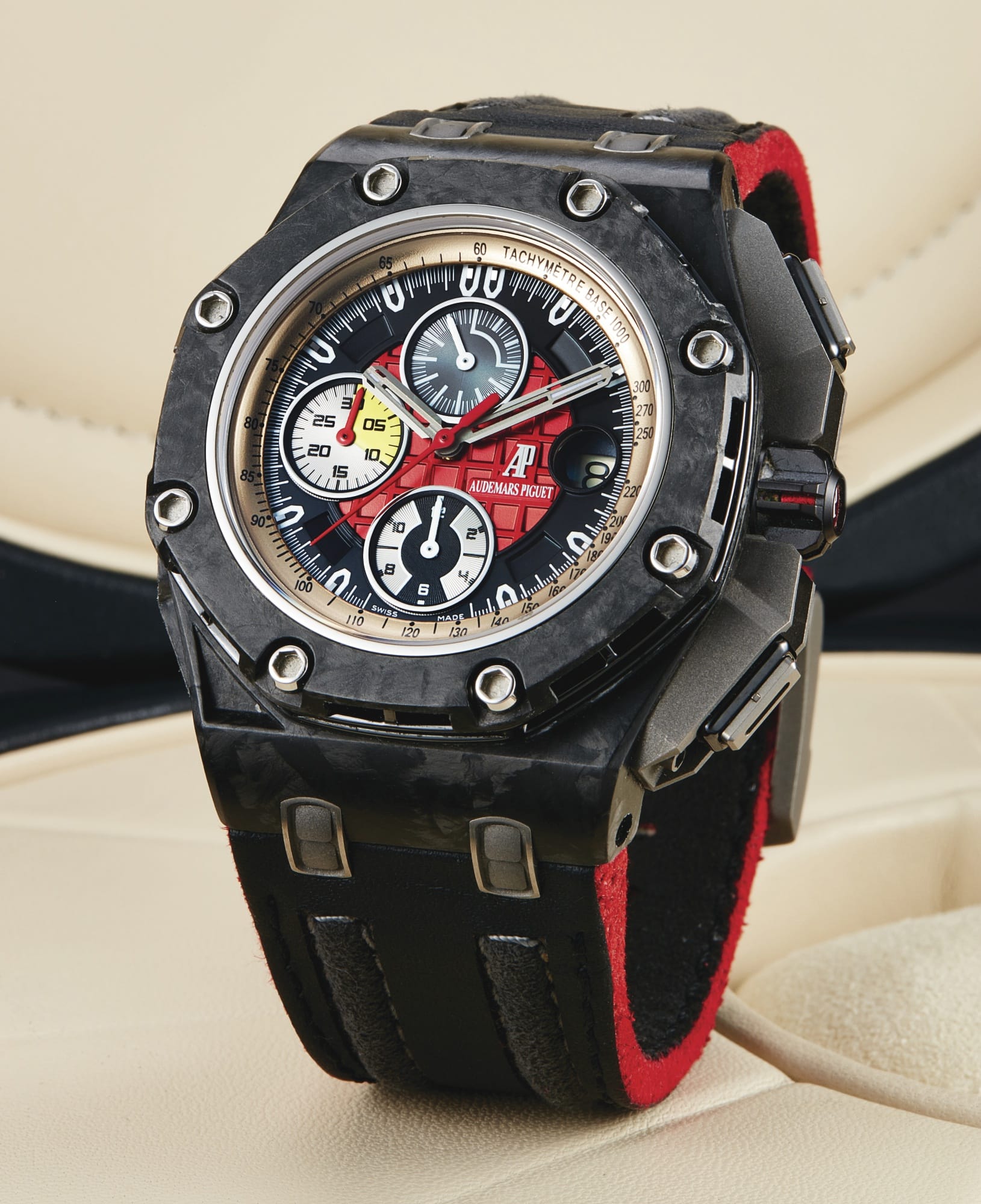 Another limited edition sports watch which, this time, seems to perfectly encompass all that is the Grand Prix. With a cal. 3126 automatic movement and iconic Royal Oak Offshore case, made from forged carbon and ceramic, this is a solid chronograph that delivers on many levels both visually and technically. Topped off by the traditional Audemars Piguet titanium watch strap, it’s expected to fetch between £18,000 and £26,000 on the day. 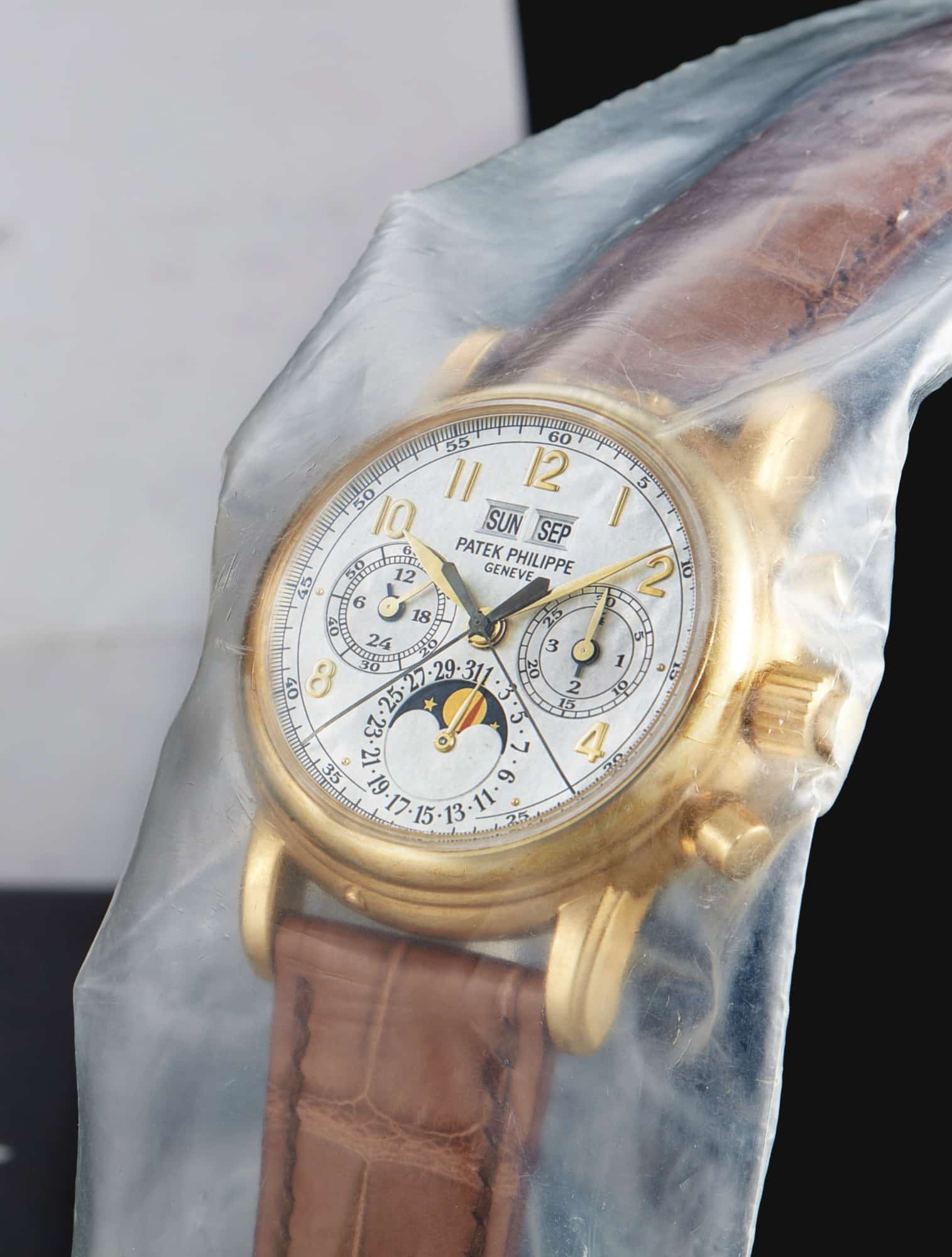 No watch auction in the world, least of all one run by Sotheby’s, is complete without at least one or two designs from Patek Philippe. This rare example in yellow gold has all the hallmark style you would expect from the pre-eminent designer and it’s a watch that delivers plenty of panache as you would expect. Three dials – including one which shows the moon phases – dominate the face and the 18 carat yellow gold circular case just sets everything off perfectly. If you’re looking for a rare watch with plenty of character from one of the best designers on the planet, this one is expected to reach between £110,000 and £200,000 at auction.