Last week Geneva’s International Motor Show opened its doors to the public for the 88th consecutive year. Over the coming week, motor and racing enthusiasts will be flocking to the Swiss city to witness world premieres from the likes of McLaren, Bugatti, Ferrari, Porsche and Lamborghini. And although this is a car show, a colourful shaped piece of metal with four wheels and a blaring engine is not what has people excited. Instead, the release of Richard Mille’s new wristwatch, the RM 11-03 is causing all the hype. Last week Richard Mille and McLaren purposefully unveiled their latest collaboration at the Geneva International Motor Show because the bold watch is inspired by none other than McLaren’s 720S supercar (a car that debuted in Geneva last year).

The partnership between Richard Mille and McLaren has been blossoming since the car giant signed a 10 year partnership with the Swiss manufacturer back in 2016. Last year’s collaboration with McLaren’s Formula 1 team produced the RM55-03, a spectacular ultra-light weight tourbillon wristwatch, which currently retails for just shy of 1,000,000 CHF! However, this year it was McLaren’s auto making company who inspired Richard Mille to create one of its most unusual and bold wristwatches yet. 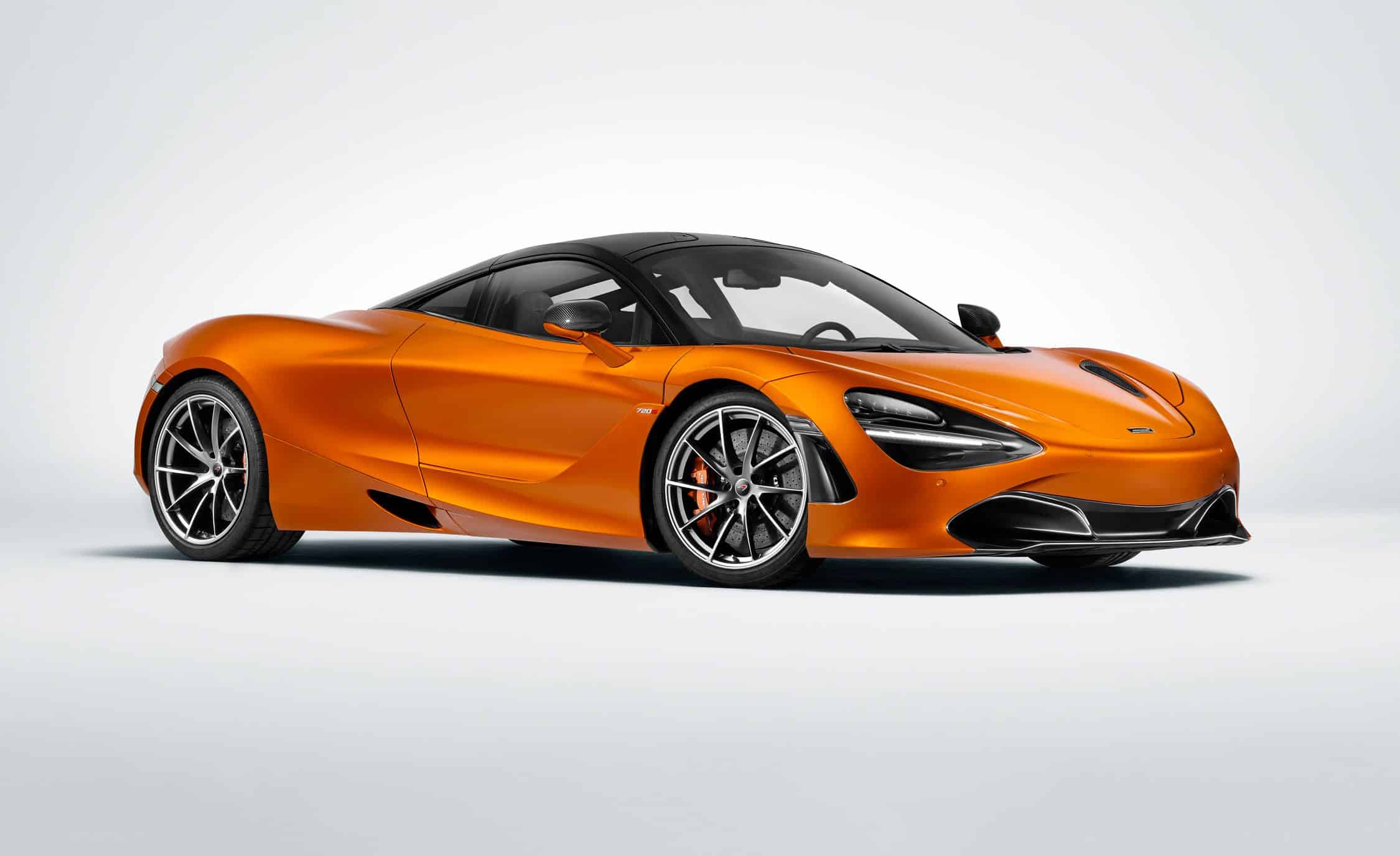 The exceptional design is limited to only 500 pieces worldwide and will retail for around £140,000 (still an eye watering sum, but nowhere near as heart stopping as the RM55-03!) 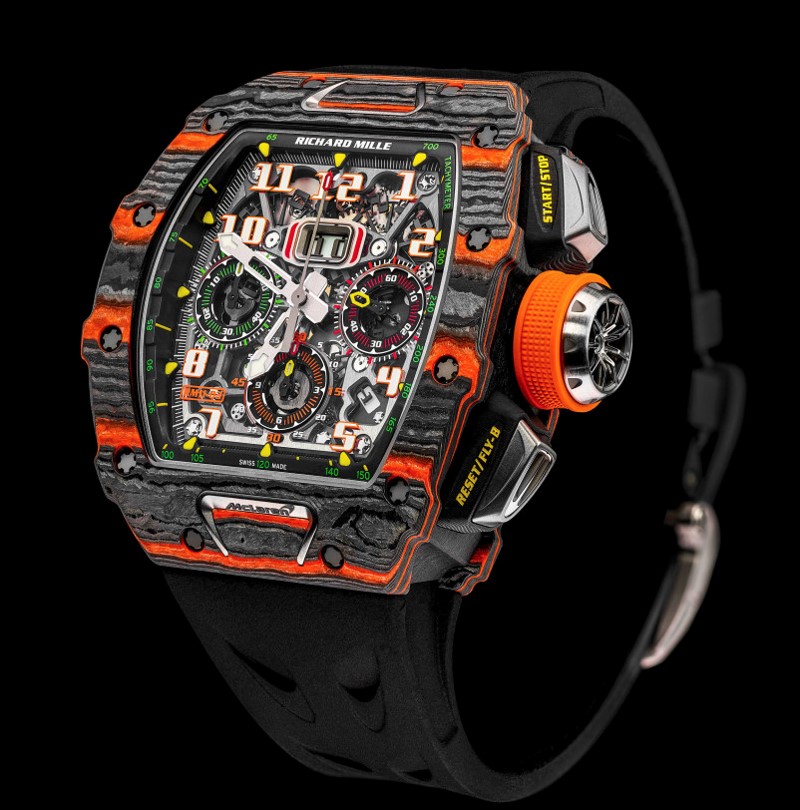 The intelligently engineered 49.94 x 44.50 x 16.23mm case is made from a unique blend of Carbon TPT and orange Quartz TPT (a colour famously accredited with the McLaren F1 team). The multiple surface layers are saturated with resin and orange resin, a specific mixture of chemicals specially developed for Richard Mille, which creates a beautiful wave-like effect on the case surface.

Robert Melville, a design director at McLaren, worked closely with Richard Mille to make sure that the wristwatch mirrored features of his 720S supercar perfectly. The two titanium pushers have been shaped to mimic the headlights of the attractive supercar, the titanium crown resembles the wheel trim of one of the new McLaren motors, and the McLaren signature located below the dial has been specially designed to emulate the appearance of the McLaren F1 racing cars’ air vents. These details may be minor, but they really do make this wristwatch stand out.

The RM11-03’s sizeable (and colourful) dial features large white Arabic numerals outlined in orange, and an enlarged date indicator located below 12 o’clock, which in many ways, resembles a car speedometer. The date function conveniently adjusts for months of 30 or 31 days automatically (guaranteeing us absent-minded folk will never read the date wrong again).

Hidden in-between the 4 and 5 o’clock hour markers is a small month indicator. Although a little difficult to see at first, the month indicator is a useful added feature to Richard Mille’s second McLaren inspired timepiece. The three sub dials located at 3, 6 and 9 o’clock perform chronograph functions measuring seconds, minutes and hours. The chronograph function is activated by pressing the pusher located in-between 1 and 2 o’clock, and is reset by pressing the ‘fly back’ pusher located between 4 and 5 o’clock.

The RM 11-03 houses calibre RMAC3, and has an automatic winding movement. The power reserve lasts around 50 hours, however this really depends on how long the chronograph function is active for. Richard Mille watchmakers have used a unique double barrel system to reduce pressure on the individual bearings and pivots to ensure a maximum long term performance.

This means that the sporty wristwatch can absorb all types of shock produced by the wearer’s movements and activity levels. The RM 11-03 is a highly technical and bold looking wristwatch, and now that we have examined every inch of this 'tangerine God', we can see why it has caused such a stir in the horological community! 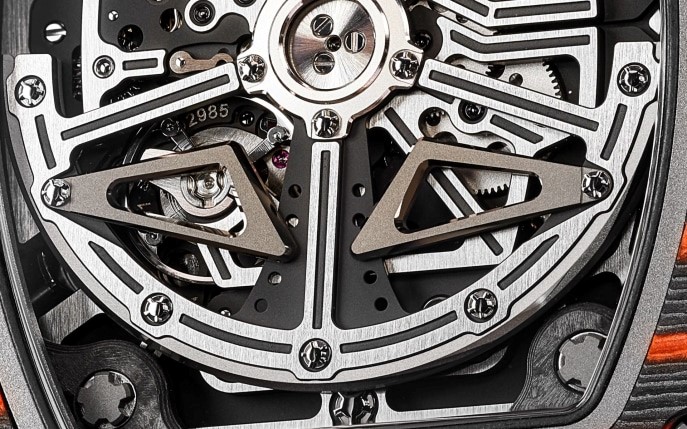 If you fancy keeping up-to-date with the Geneva International Motor Show, click here. Or if you want to learn more about Richard Mille’s newest edition, click here.