Rolex are considered to be the most recognisable and powerful watch brand over the past century, often showcasing new and innovative timepieces ahead of the competition. During the last century, Rolex has released some truly special timepieces that have stood the test of time, and are sought after by vintage Rolex collectors today.

One of the biggest things many fear factors when it comes to vintage Rolex is the fact that condition there may be some wear and tear and aging throughout the watch. Although you can’t stop the aging process of each watch, the added value of vintage Rolex comes from how the watch ages and whether a vintage watch has kept in original condition – something that becomes a vital factor when searching for vintage watches.
Here are just a few of our picks of vintage Rolex timepieces that collectors are on the look out for today;

Much like the namesake suggests, the Explorer II ‘Steve McQueen’ 1655 shot to fame when it was once rumoured to be worn by the iconic actor Steve McQueen.

The 1655 features a bright orange 24-hour hand specifically designed to aid scientists and explorers who worked in dark conditions to help determine whether it was ‘day’ or ‘night’. 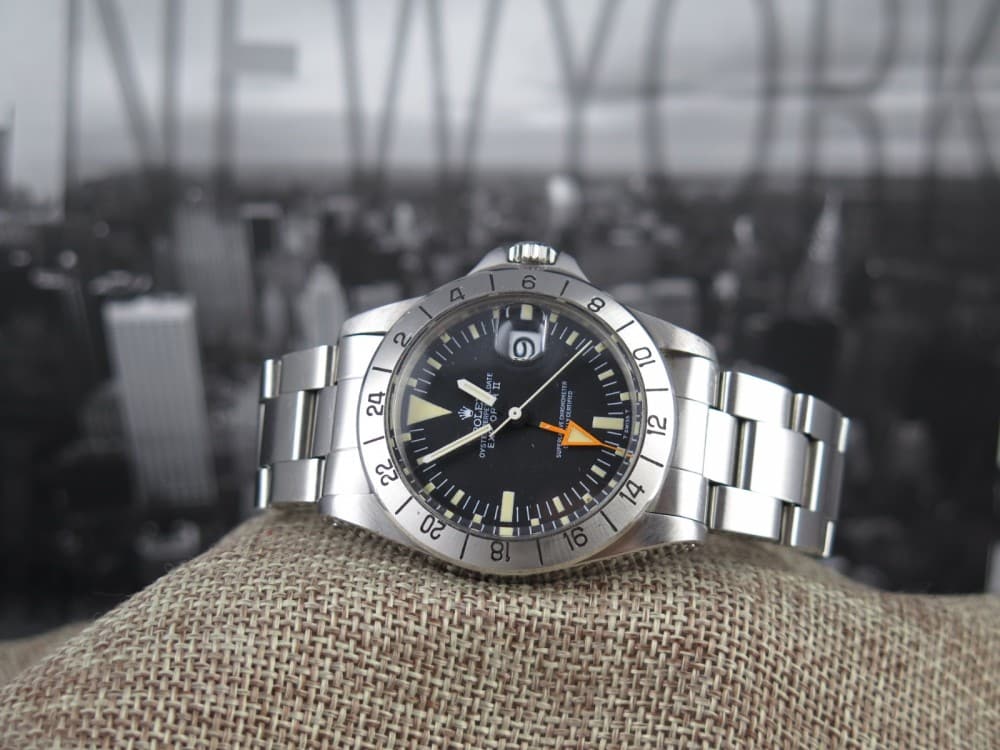 Produced in 1971, this particular timepiece did not start out to be a piece everyone wanted, specifically being overshadowed by the highly successful Rolex GMT-Master Pepsi and Datejust. This was mainly down to the fact that the GMT also displayed a second-time zone, and demand for that particular model was massive at the time.

In recent years many collectors have looked to acquire the 1655 because it is a rugged yet striking looks, scarce availability and celebrity endorsement. The market value for this timepiece has shot through the roof. You would have been able to pick up this example in original condition with papers some 15 years ago for around £4,000, now the same model is around £22,000.

Although many collectors can point to the successors of the 5512, the 1680, the 5513 and the 16800 as also vintage Submariners that have traction in the current market, you do have to appreciate the Rolex Submariner 5512 as the pioneering Submariner that defined the corresponding Submariner releases. 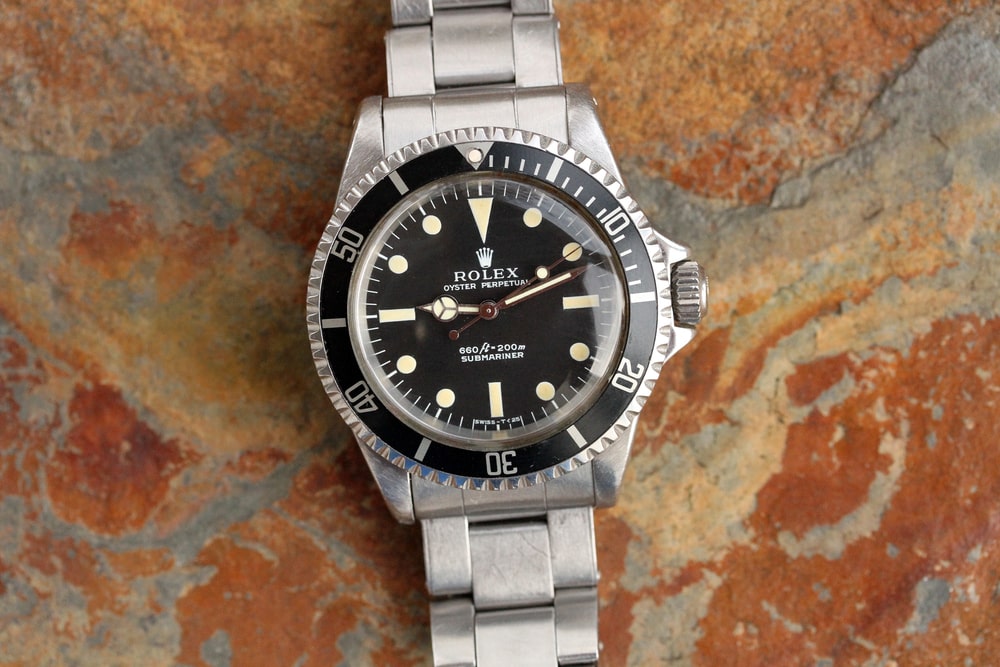 The Rolex Submariner 5512 was in production from 1959 until around what is believed to be 1978. Although a true classic in design and finish, the Submariner 5512 underwent a several changes during the course of its production. These include changes to the crown guards, dial updates, dial writing changes and calibre changes.

Take for example the crown guards, initially the 5512 was released with square crown guards, updated to pointed and then finally changed to the rounded which we see used with today’s Submariners.

This iconic timepiece does vary in value given originality, production year, and any patina on the dial or faded bezel. To give you some perspective, an early 5512 with square crown guards sold at Christie’s in 2013 for just over $200,000. A later 70s 5512 may be valued at around the £10,000 mark.

Looking at the history of the Rolex Daytona, I could have easily chosen one of the iconic Rolex Daytona ‘Paul Newman’ watches (6262, 6263, 6264, 62650) to feature on this list. However, I feel the later 16520 is definitely rising in prominence with new Rolex collectors.

Originally released in 1988, Rolex also release the 16523 (steel and 18k yellow gold) and the 16528 (18k yellow gold) with the stainless steel examples as an entirely new series. The Daytona increased in size from originally 37mm to 40mm, featured a new sapphire crystal, metal in-lay hour markers, contrasting sub-dials and the new screw down pushers to activate the Chronograph. 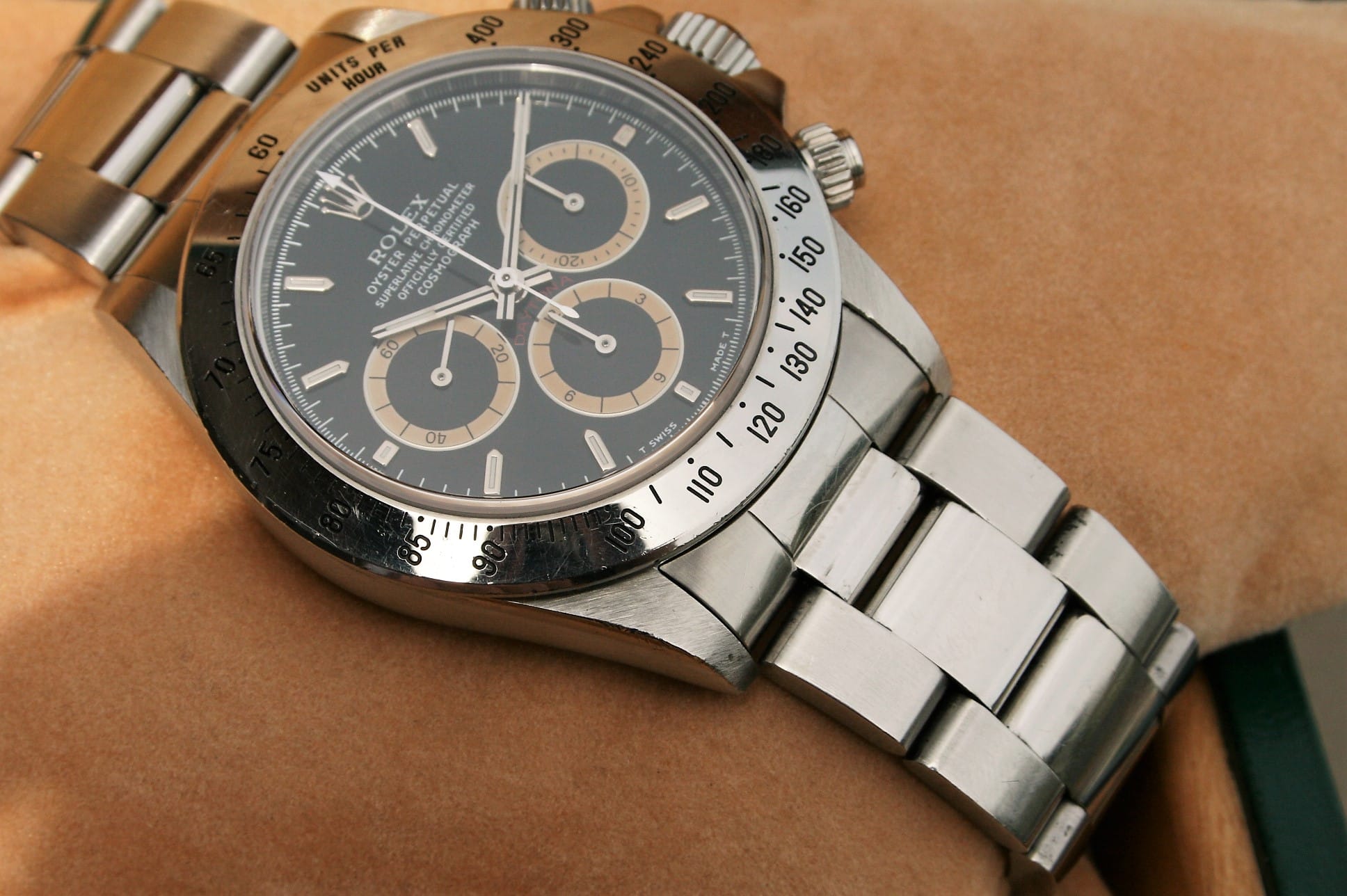 The most important change for this model came in the form of the movement. The movement was an adaptation based on that of the Zenith El Primero 400 calibre, very much considered to be the best automatic chronograph movement available on the market at that time. The movement was based on a new formula, recognizing the need to improve reliability whilst also reducing the need for maintenance. They called this new found movement 4030 calibre, which drastically shaped the future of the Daytona movement thereafter.

The success of the 16520 was unprecedented. The combination of sleek design, limited production (namely down to limited supply of the base movement created by Zenith) and strong demand quickly made this example very much a cult model that collectors had to have. 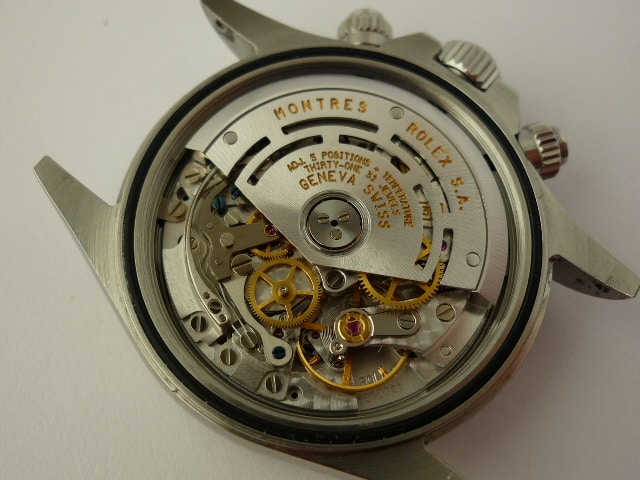 The price of this particular example once again varies down to age, condition, originality and whether the watch is complete with box and papers. A mid production example in excellent original condition with papers, are valued in excess of £25,000.

First produced in 1954, the 6542 model was developed at the request of Pan-AM Airlines to provide a watch that could display two timezones for pilots who travelled long-haul flights. The answer was a 24-hour GMT hand with a 360 rotating bezel. 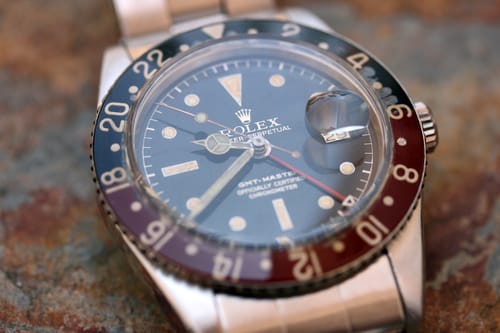 The 6542 GMT-Master was instantly a hit and became the go-to watch for pilots and international travellers. The 6542 were equipped with an acrylic type bezel insert named Bakelite with sunken numerals in the bezel insert, which once again added a contemporary twist on the GMT-Master. The Bakelite bezel didn’t last long – due to it’s fragile nature, the Bakelite was replaced circa 1956 and replaced with a metal insert.

Due to the limited run of the Bakelite bezel 6542, these are extremely rare and hard to find, hence being very valuable to certain collectors. At the current market, due to scarce availability on the current market, the GMT-Master 6542 Bakelite are valued in excess of £35,000.

Our Favourite Rolex Watches For Travelling!

IWC Spotlight: A Look At The Brand Steeped In History And Refinement