Being a reigning heavyweight boxing champion is tough work. Everyday you are constantly pushing your body to the max and, when competing, you’re taking blows to the face every other second. So it’s only fair that the job comes with some pretty nice perks. Money, fame and a killer watch collection!

Just two days ago Anthony Joshua was in front of the world’s media discussing his upcoming fight against Kiwi national, Joseph Parker. As the favourite British boxer of his generation, Joshua seems to find securing world championship titles and lucrative sponsorship deals quite an easy task (or so he makes it seem!). Joshua has scored deals with brands like Jaguar, Lynx, Sky Sports and Audemars Piguet.

And at Tuesday’s press conference, the young athlete proved he is reaping the benefits of his sponsorship deals by sporting one of the latest Audemars Piguet pieces on his wrist. The Royal Oak Offshore ‘camouflage’ was unveiled at SIHH earlier this year, and is not scheduled to appear on the market until July 2018. Yet, the boxing star has jumped the queue and caused a flurry of excitement among fans and fellow AP lovers. So what should we expect when the Offshore ‘camouflage’ is finally in stock?

The chunky 44mm stainless steel case has a thickness of 14.4mm and features Audemars Piguet’s first ever khaki coloured ceramic bezel, push pieces and screw-lock crown. As with all the Royal Oak chronograph models, the watch exhibits a “Grande Tapisserie” patterned dial, a date indicator at 3 o’clock and three chronograph sub dials. 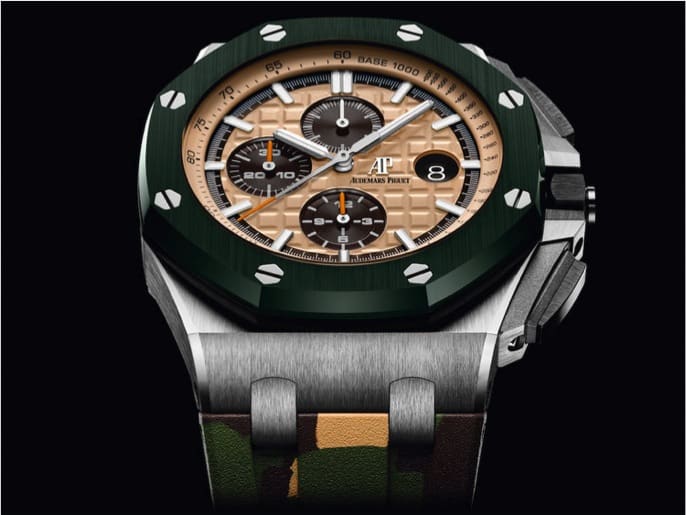 Another first for Audemars Piguet is the ‘camouflage’ rubber strap. I feel like this pattern is a bit like marmalade, you either love it or hate it. But so far, there have been more signs of love than hate towards the macho watch.

The Offshore houses the self-winding calibre 3126/3840, which was based on the Swiss manufacturers very own in-house calibre 3120.

Overall, the ‘camouflage’ Offshore, which will retail for $31,000, is a masculine timepiece with militaristic appeal, the perfect makings for a boxing champion’s wristwatch!

Another watch the sportsman has been spotted wearing is the rose gold Royal Oak chronograph. Recently discontinued, this modern piece is the answer for the ‘every occasion’ watch. It is perfect for nights out, days out and everyday wearing.

The 41mm 18-carat rose gold case features a rose gold bezel, screw-lock crown and pushers. Ref. 26320OR.OO.1220OR.01 is simple to use, legible and easy on the eye. If you’re not a fan of the black dial, then do not fear Audemars Piguet has created the same model with a blue, chocolate or white dial (white dial has also been discontinued).

It seems every day the athletic boxer has another AP on his wrist. Below he is wearing an Audemars Piguet extra-thin Royal Oak Tourbillon ref. 26510IP.OO.1220IP.01 (another watch unveiled at SIHH earlier this year), and a Royal Oak Offshore chronograph in 18-carat rose gold with diamond pavé ref. 26215OR.

Whether he’s attending events, press conferences or relaxing on nights out, Anthony Joshua is ALWAYS wearing one of Audemars Piguet’s finest creations, and who can blame him? If this article has tickled your chestnuts and you want to see more Audemars Piguet watches, browse our collection here!