Celebrities And Their Watches: Check Out What The Stars Are Wearing - Part 2

This is our second instalment of Celebrities and Their Watches, where we take a look at what’s on the wrist of some of the biggest stars. This article contains one of the best footballers to ever grace the game, a basketballer turned investor and contributor to Haute Time – one of the largest luxury timepiece publications – and a rapper who put his face on an 18ct yellow gold watch. 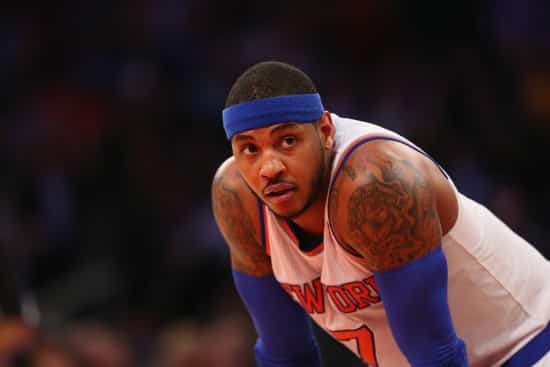 Carmelo Anthony recently claimed that he is “one of the first basketball players to embrace the world of timepieces and watches”, and by having a look at his watch collection it’s hard to argue with him. Anthony says he has over 20 watches, all of which are kept in a custom display cabinet, and compares his passion for watches to that of a women’s interest in handbags.

Anthony isn’t just a collector. He’s an investor and contributor in ‘HauteTime’ magazine and a brand ambassador for IWC.

To start with, the basketballer has a Rolex Yacht-Master II in yellow gold, a Breguet Marine Royale in rose gold and an few Hublot models – Hublot Ferrari, Hublot UNICO titanium and the Hublot Diver with original diamonds. He describes his Hublot watches as his ‘”fun pieces”.

Melo also has 3 Audemars Piguet’s; the Royal Oak Offshore ‘Volcano’; the Royal Oak Offshore Michael Schumacher titanium – a watch he describes as special due to its rarity; and an ‘everyday’ – as he described it – 39mm Royal Oak in stainless steel. To add to these, he has 2 Patek Philippe 5980’s. One stainless steel, and the other a rose gold on a leather strap. Anthony said these watches “completed” his collection.

The last batch of watches are from Richard Mille and IWC. Of the former, he has the RM 030 Rafael Nadal, which he is fascinated by due to the weight of it (around 55 grams), and a RM 011 Felipe Massa in titanium which he loves due to its versatility – classy and eye-catching but can be worn everyday.

Last but not least, his IWC collection. He has an aquatimer, a special edition Mohammad Ali Big Pilot, and a watch he describes as his best watch (well technically), a Portuguese Mystère Squeletter tourbillon – a beautiful piece.

His collection is definitely up there with one of the best pieces I’ve ever seen.

Michael Jordan is a basketball legend and is widely considered as the all-time greatest of the sport. He is a 6-time NBA champion, 6-time NBA MVP, 14-time NBA All Star, 10-time NBA scoring champion and a film star (I’m sure you remember Space-Jam) – quite the accolades. Nowdays, Jordan earns his money through endorsement deals – $30 million a year just through that – and therefore has enough money to spend on luxury timepieces.

The first watch is a Ulysse Nardin Sonata, something a bit different from the usual suspects but a useful watch that is packed with many different functions. The white gold watch features a chiming alarm, a big date, a second time zone and a countdown mechanism. This watch costs around €60,000.

The second watch is a massive 50mm Richard Mille RM 032 diver chronograph in red gold. Not your everyday Richard Mille watch, however still a stunning sporty piece. The watch features a flyback chronograph, an annual calendar and a oversize date at 12 o’clock and a month indicator between 4 and 5 o’clock. This watch retails at €154,500.

Another watch brand that graced his collection is URWERK which really confirms that Jordan loves to be unique when it comes to his watches. The two models he has is the URWERK UR-203 and the URWERK UR103, the later being released in 2005 and has since been discontinued – making it a classic with collectors. 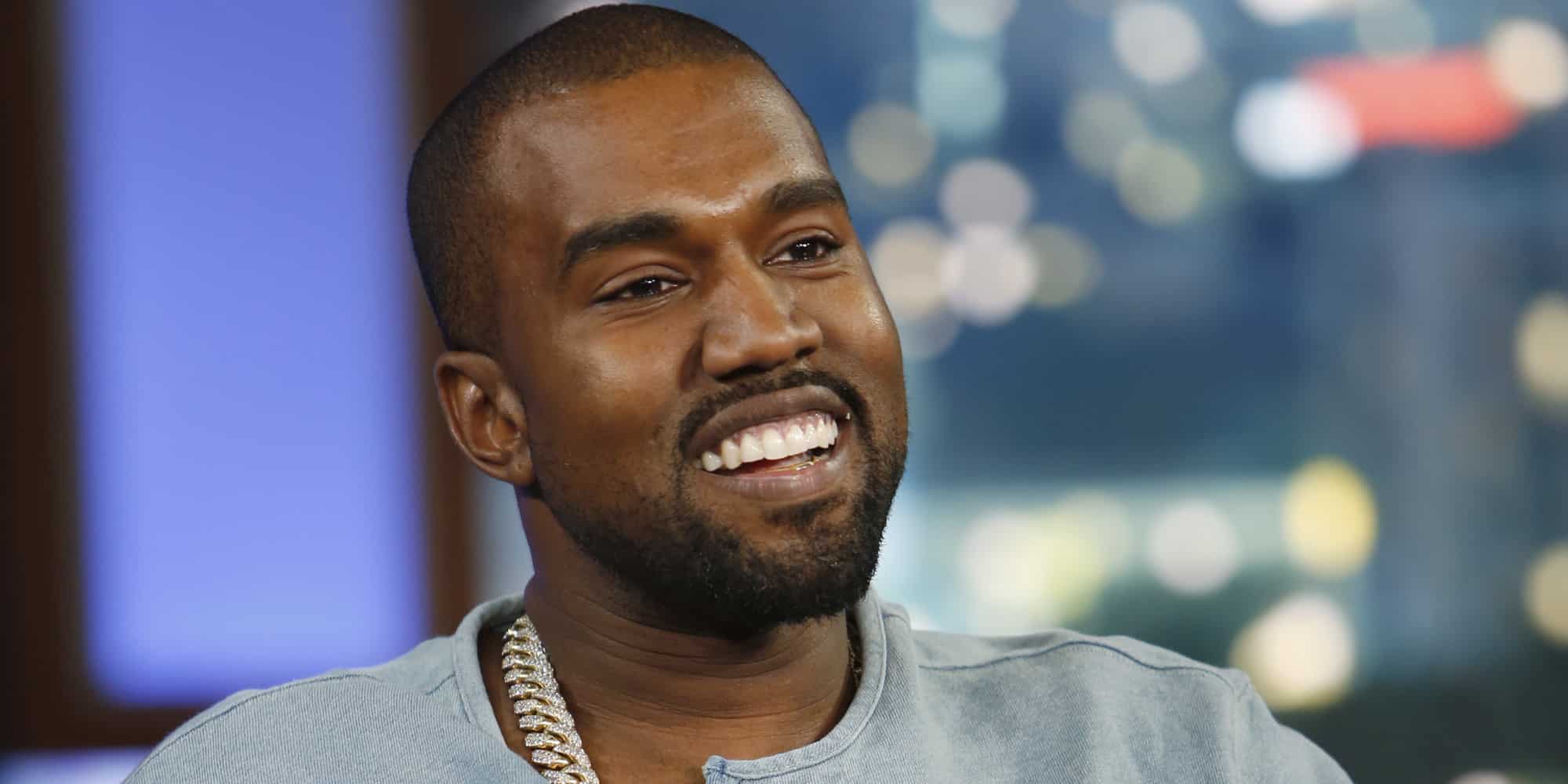 One of the biggest celebrity names, Kanye West has made a name for himself through his chart-topping songs and his infamous ego. An example of this, in watch terms, is the $180,000 18-kart yellow gold Tiret watch that features a jewel encrusted silhouette of his face on the dial. His ‘face’ – which obviously includes sunglasses – is comprised of eight karats of yellow, black, brown and white diamonds.

Aside from this watch, Kanye has also been seen wearing a gold Rolex Daytona, a limited edition Bape G-shock and a customised all-black Rolex Submariner.

Aside from collection awesome watches, Kanye (as well as Jay-Z) likes gifting them too. It was reported that the pair of them gave their sound engineers customised Rolex GMT Masters for not leaking their new album. 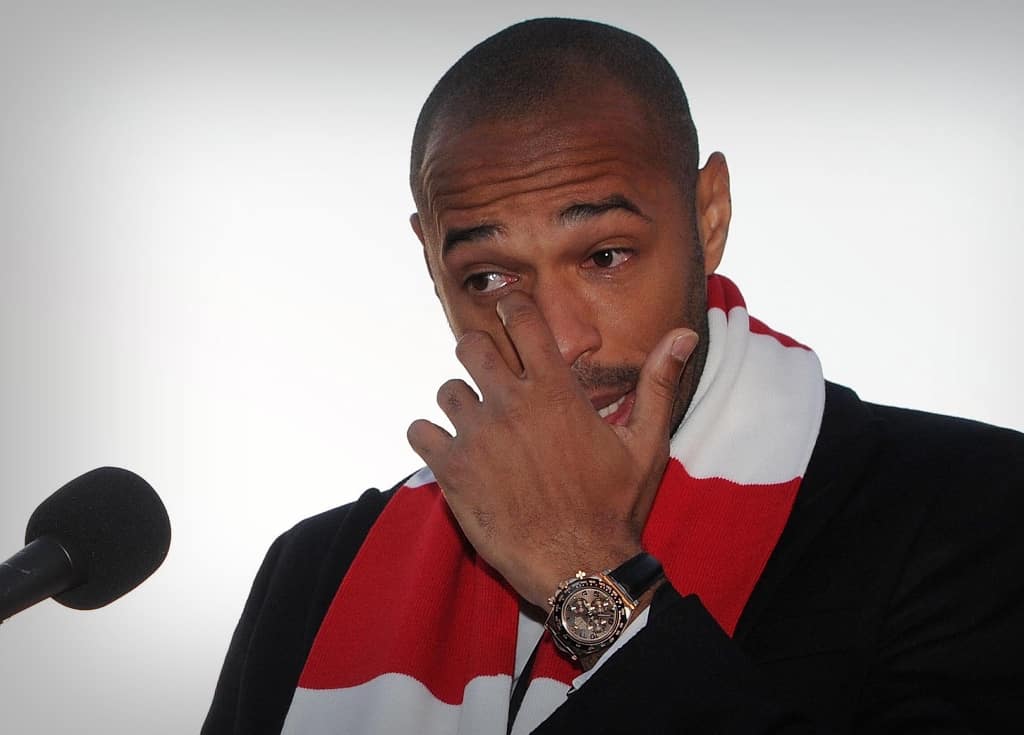 Thierry Henry – probably one of the greatest footballers to ever grace the English Premier League. It is therefore fitting that his watch collection matches his footballing talent.

When it comes to his watches, Henry tends to stick to what he knows and loves. He has two Rolex Cosmograph Daytona’s, one in stainless steel with a white dial, and one (pictured) in rose gold with a black cerachrom bezel and black leather strap. Another favoured model of his comes from a different brand, Audemars Piguet.

The last two watches in the collection, both being Audemars Piguet again, are not watches you see everyday. Both pieces are from the Royal Oak Concept family – a line that AP use to show off their knowledge, technical excellence and innovative materials. The first of the two is a Royal Oak Concept Carbon. The watch features a forged carbon case, black ceramic bezel and ceramic pushpieces in addition to a hand wound tourbillon and chronograph function. The final watch is the Royal Oak Concept GMT. Anybody who knows luxury watches will instantly recognise this watch due to the white ceramic bezel. Like the carbon Concept, the watch features a tourbillon as well as second time zone with day/night indicator.

Overall a collection that tells you he is a man of acquired tastes – nothing too extravagant for the sake of it. Bravo Thierry!

Celebrities And Their Watches: Check Out What The Stars Are Wearing – Part 1