The MB&F watch brand has continued to break the boundaries of corporate watchmaking, and started a new creative revolution in the watch industry. Captained by the charismatic Maximilian Büsser, the MB&F name actually stands for “Maximilian Büsser & Friends”, giving understanding to the brand ethos of the Swiss watch brand. The brand is said to be an artistic concept laboratory based around the simple idea – to assemble collectives of independent watchmaking professionals to develop radical horological masterpieces. MB&F continue to respect watchmaking tradition, but agree not to be constrained by it, instead drawing inspiration from tradition to re-invent new trends for the future.

When looking at MB&F’s Horological Machine No. 6, there’s a lot to admire about the ambition, innovation and creativity of this Swiss manufacture. The design is said to be inspired by a Japanese anime cartoon series from Maximilian Büsser’s childhood. In each of the four corners of the HM6’s biomorphic case is a 360 degrees sphere, capped top and bottom by transparent sapphire crystal domes. The front domes rotate vertically and display a conventional hours and minutes. The back domes featuring twin spherical turbines spin, regulating the automatic winding system to reduce stress and wear. 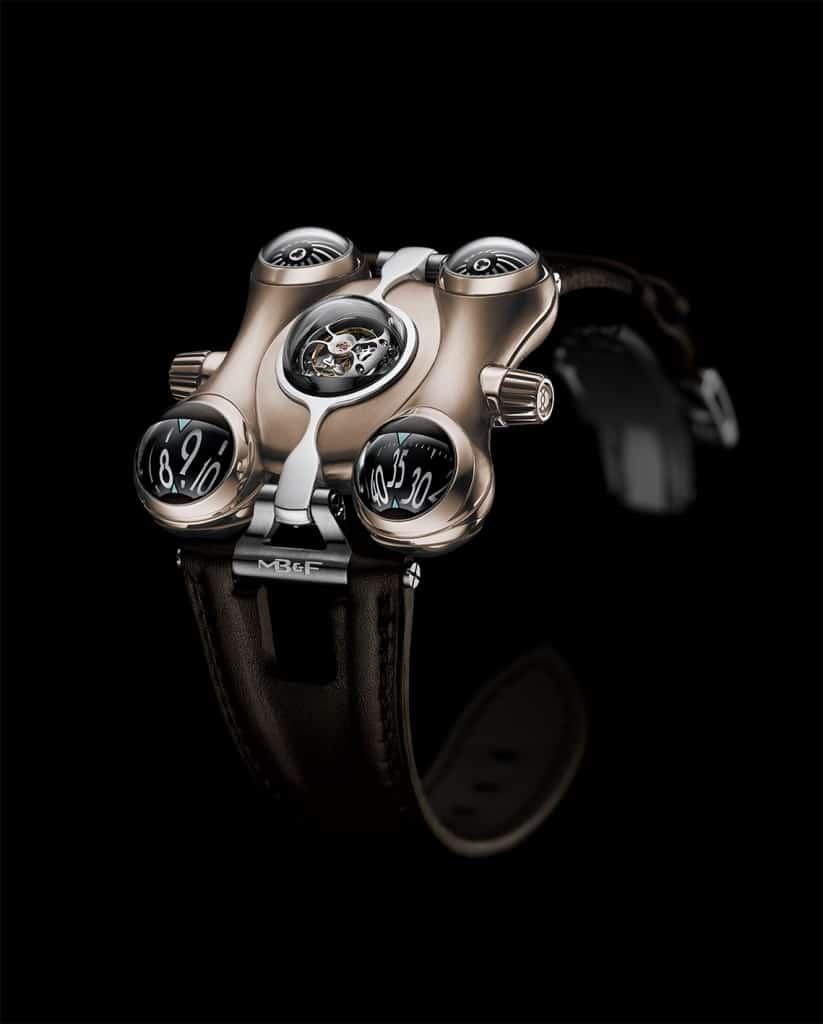 The watch also features an eye-catching central tourbillon located at the very centre of the case, housed by a sapphire crystal dome. The case of the HM6 was machined by two solid ingots of 18K rose gold and completed with a hand-stitched calfskin strap with a rose gold custom designed folding buckle.

Felix Baumgartner and Martin Frei, creators of Urwerk, joined forces in 1995 to discuss the prospects of developing and manufacturing watches that are different from conventional watches. In 1997, the creative partnership formally opened Urwerk, with the manufacture presenting their first timepiece with AHCI at Baselworld that same year.

To celebrate the 20th anniversary of Urwerk, the Swiss watch manufacture have released a stunning timepiece that embarks on a retro-futuristic experiment. Far from being an exercise in nostalgia, the new Amadeus UR-210 makes the sort of contrary and provocative statement expected by the brand that disdains from the ordinary. 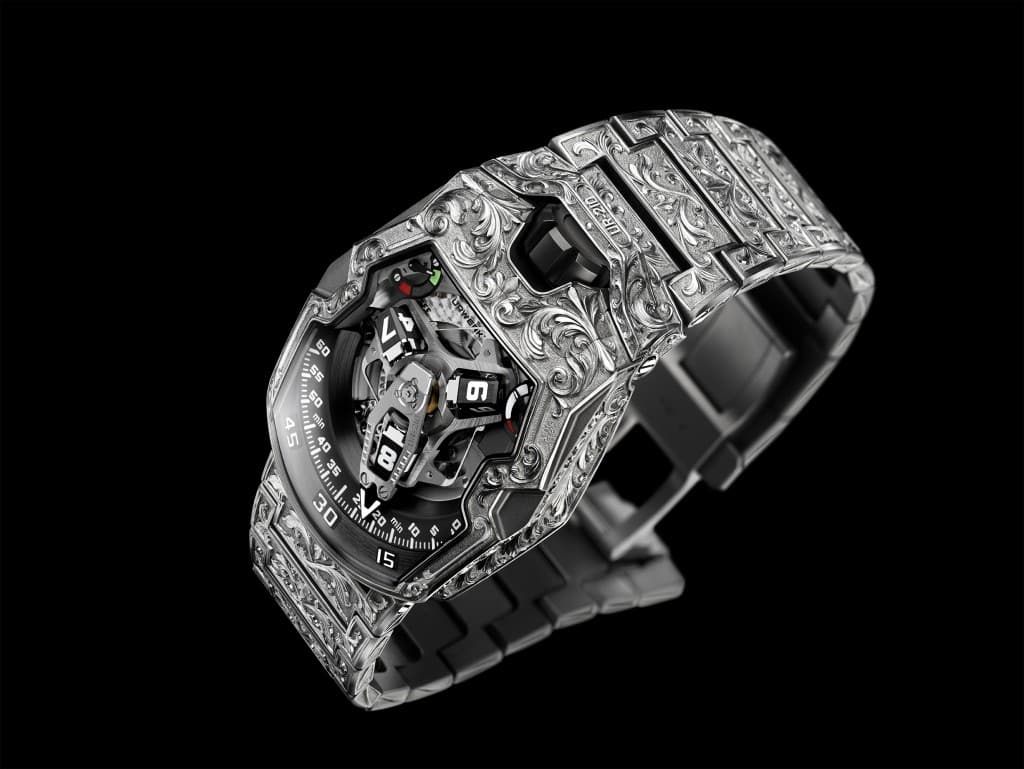 One of the main things that stands out about this watch is the incredible hand-engraved 43mm steel and titanium case. The watch took over 260 hours of painstaking engraving to complete. Ensuring the continuity of the design was the main objective and the greatest difficulty for the engraver, according to the Swiss watch brand.

The UR-210‘s satellite complication with retrograde minute is both highly original and totally explosive. The principal feature is a high-tech, oversized, three-dimensional retrograde minute-hand. Its function is to enclose the hour satellite and indicate the time as it transverses the 0-to-60 minutes scale. The watch features a power reserve indicator at one o’clock and a winding efficiency indicator at eleven o’clock.

HYT Watches are truly innovative watch manufacture, describing themselves as hydro mechanical horologists. For those that don’t know HYT are the only watch manufacture that employ the use of liquid to display the time, with a series of tubes and different coloured liquids at different points showing the time. HYT are dedicated to nonconformism, drawing dedication from the oldest traditions of watchmaking, and in true style smashing them to create an innovative watch mechanism. 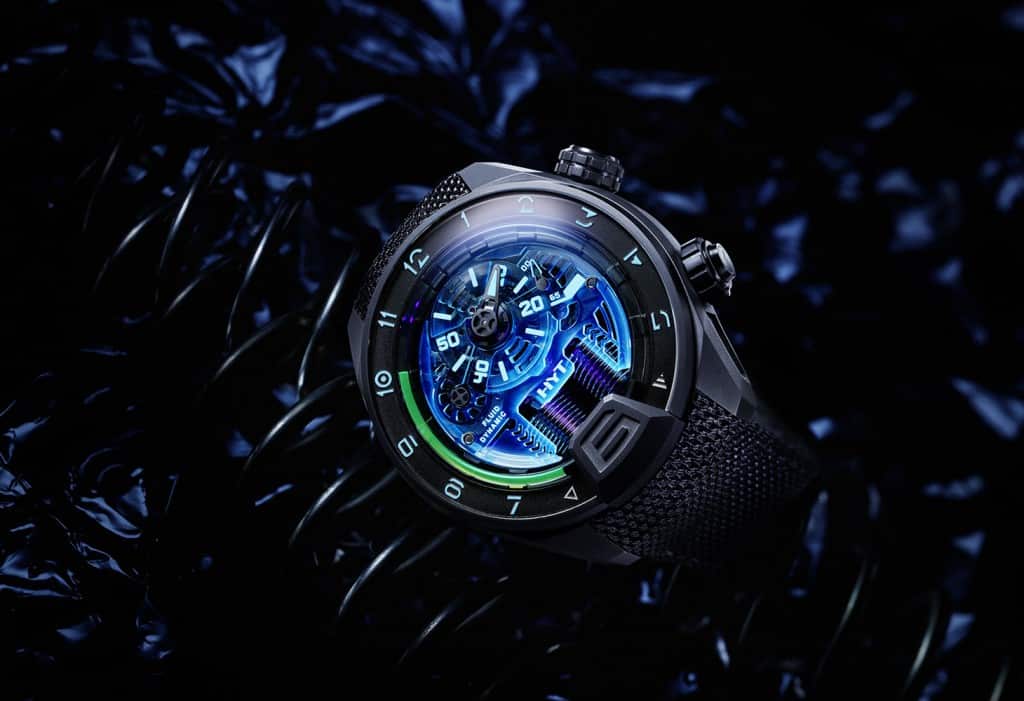 The HYT liquid mechanism is perfectly demonstrated in the latest model to be released by the Swiss manufacture – The HYT H4 Neo. The watch measures in at a staggering 51mm and employs the liquid time display as well as using concealed two purple LEDs, flooding the dial with light at night displaying fluorescent liquid becoming supremely striking.

There’s no doubt that HYT are a watch manufacture that pride themselves on its aesthetic looks and extraordinary mechanism, and it can certainly be said that there is not one ounce of subtly in this brands fibre. However, this gives the new watch manufacture its appeal and desirability, as they produce watches that are truly original. The H4 Neo is limited to just 15 pieces worldwide.

American watchmaker Scott Devon, is head of the incredible ground-breaking Devon Works watches. Arguably the most cutting edge watches on the market today, these timepieces are powered by the patented system of interwoven Time Belts that display hours, minutes and seconds in a way that is truly original. The Devon Works timepieces are are watch brand that look comfortable in fitting square pegs into round holes. 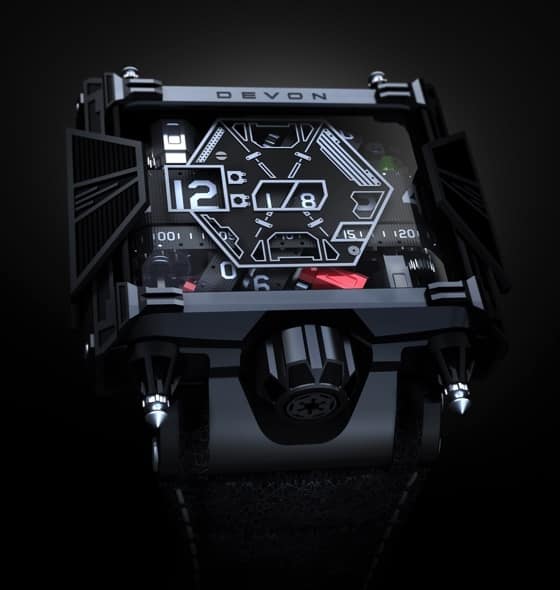 Devon timepieces are are wholly developed and manufactured in the U.S., thereby capturing the unique character of the American Dream. The brand continue to strive to offer customers timepieces that are truly different from the usual, and was even nominated for the esteemed Gran Prix d’Horologerie de Geneva in the category of Design and Concept Watch in 2010 – and was the first American watch brand ever to receive this laudable recognition.

Devon’s newest watch, a self proclaimed tribute to Star Wars, is limited to just 500 pieces worldwide, and resembles that of the face of Darth Vader. Certainly not everyone’s cup of tea – but what is undeniable is the sheer mechanical creativity and innovation that has gone into the intertwining time belts with a hours, minutes and seconds time display.

Launched in 2004, Greubel Forsey is a watch Swiss watch manufacture that continues to strive for horological excellence, being recognised and respected by industry leaders for their sheer mastery over the tourbillon complication and watch-making ability. Headed by the dynamic duo of Robert Greubel and Stephen Forsey, the up-and-coming watch manufacture very much go against the grain, shying away from bowing to traditional market forces and marketing, and instead push the limits of creativity and craftsmanship. 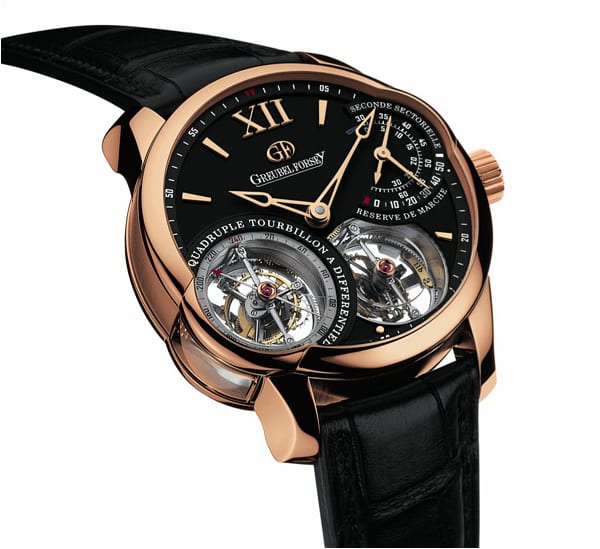 One of the most iconic timepieces from Greubel Forsey comes in the form of the Quadruple Toubillon Asymmetrical in 5N Red Gold. The four tourbillons of the Quadruple Tourbillon independently contribute towards optimal timekeeping precision, including whilst in a stationary position.

The asymmetrical case is available in two materials: 5N Red Gold with anthracite dial or platinum case with a silvered-gold dial. In any case, the technical performance of the four tourbillons matched with the contemporary aesthetics are something to be marvelled at. The animated dial provides the wearer with maximum legibility and features a centred hours and minutes, and subdials for seconds and power reserve indicators.