The Iconic History of the Rolex GMT-Master | Luxe Watches

The Iconic History of the Rolex GMT-Master

The GMT-Master is a classic example of Rolex designing and creating a timepiece for a certain group of people that require a timepiece for their environment. In this instance, the GMT-Master was created for pilots who travelled long haul distances in the height if the aviation boom in the 1940s.

Specifically, the Rolex GMT-Master was initially created for the airline company Pan AM, and issued by the company to their crews on long haul flights.

The GMT-Master featured a new 24-hour hand that directly linked with the standard 12-hour hand. This allowed the wearer to set the watch to GMT (Greenwich Mean Time), and then set the 24-hour rotating bezel as to the second time zone you required.

The very first Rolex GMT-Master was the reference 6542. This example was introduced in 1954 and discontinued in 1959. There were many notable changes to the 6542 during its short production run. One of the biggest changes was the move away from the Bakelite bezel to the more traditional aluminum bezel. The reason for the change was because of the fragile nature of the Bakelite bezel, which often cracked and shattered. It is said the Bakelite bezel 6542 was only produced for 2-years, hence making a Bakelite bezel 6542 (in good condition) highly desirable and sought-after by Rolex collectors. 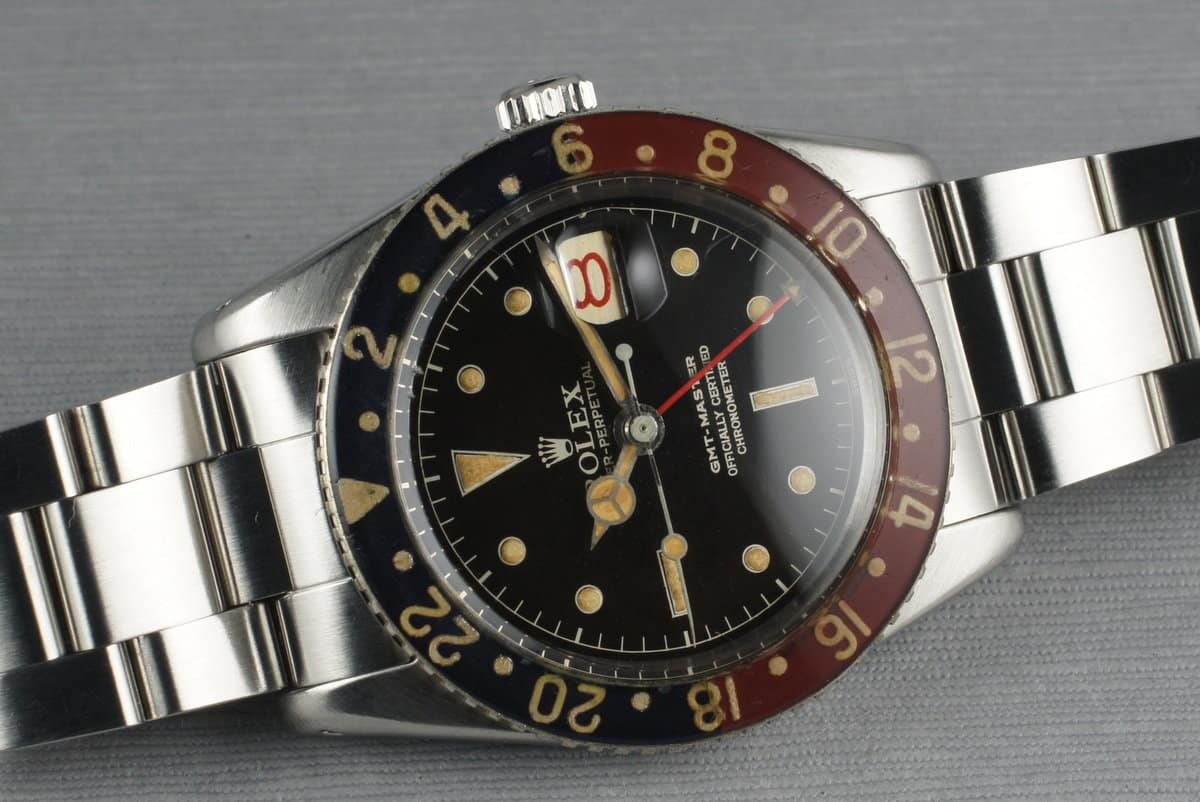 After the GMT-Master 6542, Rolex introduced the Rolex GMT-Master reference 1675 which was introduced in 1959 and continued to run until 1980. The watch featured the new calibre 1565, which was later replaced in 1964 with the newer calibre 1575. The 1675 introduced a newer feel to the 6542, in that it offered a newer more reliable movement, new crown guards and a dial reading that read “Superlative Chronometer Officially Certified”. 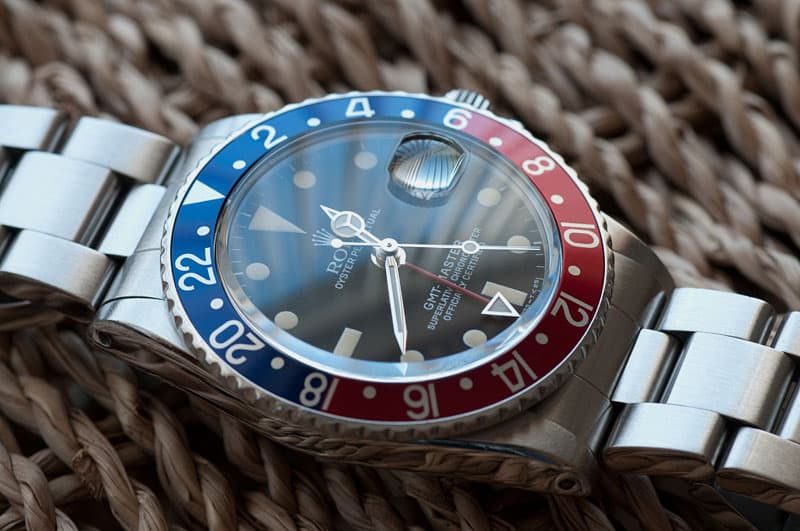 The next edition was the introduction of the Rolex GMT-Master 16750, which was in existence from 1981 – 1988. The newer reference featured the enhanced calibre 3075, hacking option and the new quickset date option. The newer reference also featured an increased pressure resistance of up to 100 meters (330 feet), which is the standard for all Rolex sports models today.

Today, the Rolex GMT-Master 16750 are highly sought after by Rolex collectors. There are just two slight variations that you can find; one is a matte finish without white gold hour markers (considered to be the rarer) and a glossy version with white gold applied hour markers. Many of the matte dials were replaced by Rolex once serviced, therefore the matte dial is certainly one to look out for.

Along with the 16750, Rolex also introduced the Rolex 16760 GMT-Master II, aptly nicknamed the ‘Fat Lady’, given the increase in size of the case and crown guards. Although both examples look very similar, the difference can be found in the movement of the 16760. The 16760 utilizes the capability of an adjustable quickset hour hand that can adjusted whilst not stopping the second hand.

The GMT-Master II 16760 ‘Fat Lady’ also featured a new colour bezel (in black and red) hence the introduction of the iconic ‘Coke’ GMT-Master. The new Coke GMT-Master was also the first GMT example to feature the preferred sapphire crystal glass. 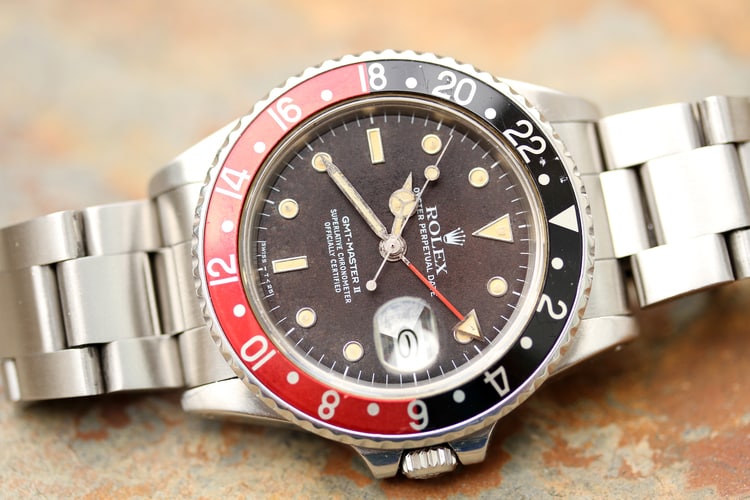 Despite the release GMT-Master II, the original GMT-Master continued in production. The new reference of the 16700 was produced from 1988 – 1999, and featured the new calibre 3175 and incorporated the non-independent hour hand originally introduced in the older (now discontinued) 16570 GMT-Master.

In the meanwhile, the introduction of the 16710 GMT-Master II took the place of the original GMT-Master II 16760 ‘Fat Lady’. This example, which is often referred to as masterpiece GMT-Master II was officially in production from 1989 up to 2007. The new 16710 sported a new slimmer design with an identical functioning calibre 3185, and later 3186 movement. The new GMT-Master II 16710 was available with the ‘Pepsi’ bezel, ‘Coke’ bezel and the all-black bezel. 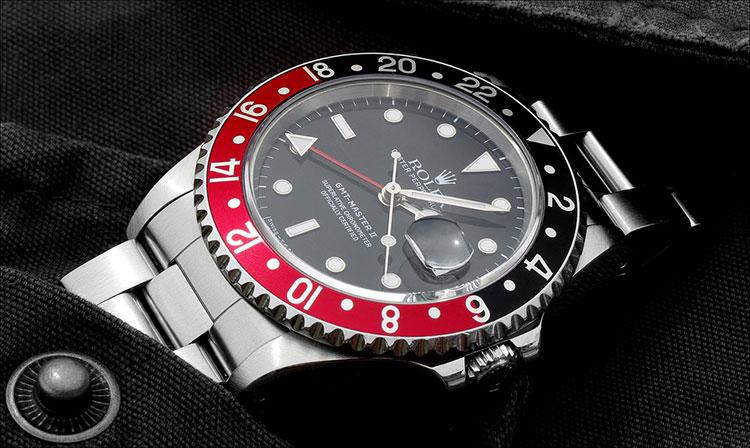 In 2007, Rolex updated the GMT-Master II into the model we recognize today. The new six-digit 116710 introduced an anti-reflective Cyclops lens, green 24-hour hand, maxi dial, and a patented ceramic bezel, designed to be more scratch proof and fade resistant, that offered just 24 clicks compared to the 120 clicks. 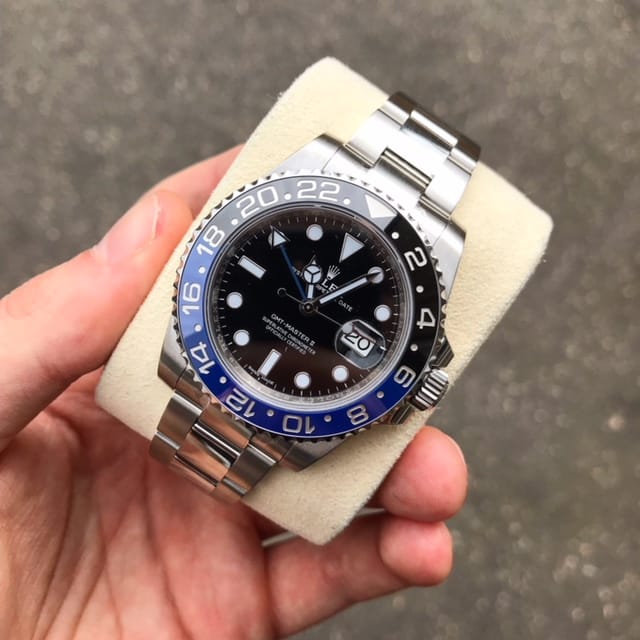 Initially, the GMT-Master II 116710 was available in stainless steel, stainless steel and 18k yellow gold and 18k yellow gold – all of which featured with the black ceramic bezel and green 24 hour hand. In 2010, the collection extended to the 116710BLNR, nicknamed the ‘Batman’, and we also saw the introduction of the ‘Pepsi’ bezel in strictly 18k white gold reference 116719BLRO in 2010. 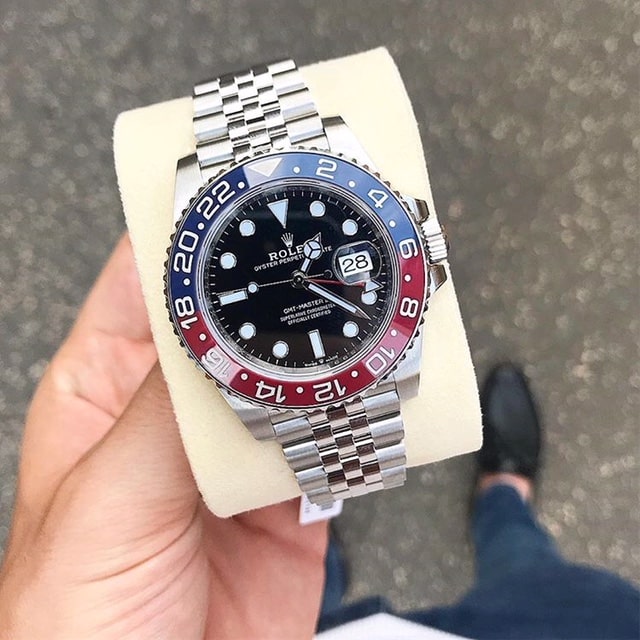