Patek Philippe was an ever present force at this years Baselworld event in Switzerland. There were a number of new releases by the giant Swiss watch manufacture, re-working or re-designing existing models to release a new selection of watches that have caught the attention of watch collectors and enthusiasts alike. Patek Philippe enriches its regular collection with a broad selection of debuts including a new perpetual calendar, a model that celebrates the 20th anniversary of a bestseller and revisited classics that will delight both connoisseurs and collectors alike.

The Advanced Research opens up a further chapter with the launch of two important innovations in the field of horological design.  One of them is the new Spiromax balance spring made of Silinvar, apart from the patented terminal curve  (Patek Philippe boss at the outer end), its geometry now also features an inner boss near the integrated collet. The second one is a compliant mechanism crafted from conventional steel that is used to set the second time zone in time-zone watches. 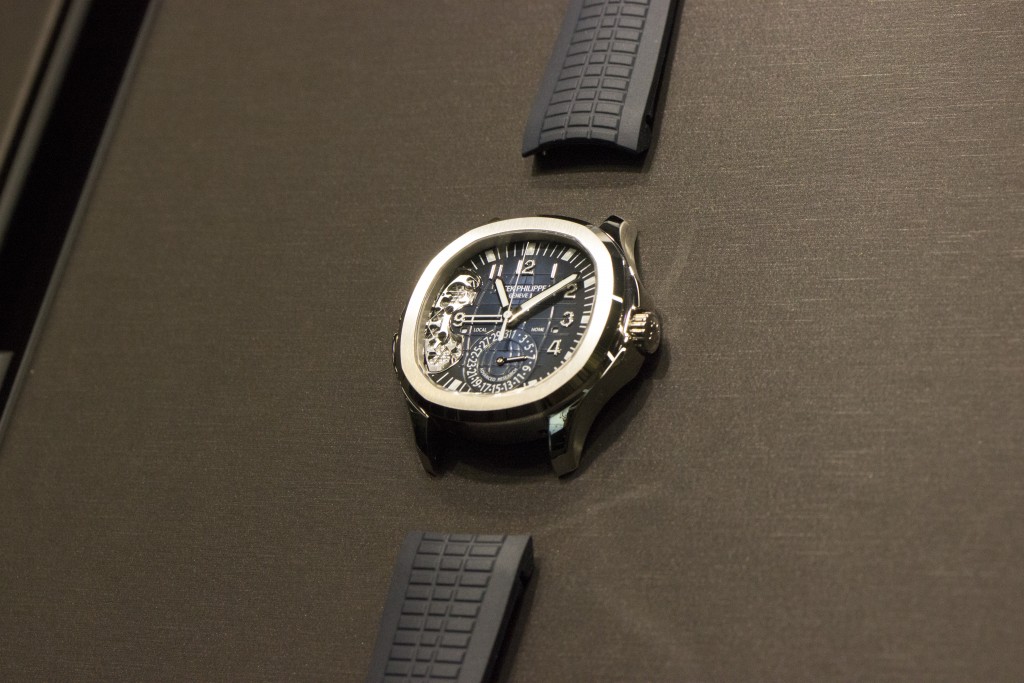 The new Spiromax balance spring innovations developed by Patek Philippe are simply ground-breaking and offers ideal prerequisites for mastering one of the most fundamental problems affecting oscillators with balance wheels and hairsprings: isochronism. The Patek Philippe Advanced Research project has significantly reduced the negative impact of the centre-of-mass imbalance on the isochronism of the balance spring itself. For the owner of the watch, this means that the watch will not run slower or faster regardless of its orientation.

To celebrate the 20th anniversary of this model, the Swiss manufacture has launched this sporty and elegant Aquanaut Travel Time Ref. 5650G, and is limited to 500 watches.

Much like with the anniversary release of the Patek Philippe Nautilus, two editions are certainly better than one. With the 20th anniversary of the Aquanaut, Patek Philippe have given us the Ref 5650G and the Ref 5168G. The new Ref 5168G is the first men’s Aquanaut wristwatch in 18K white gold, setting itself somewhat above the normal stainless steel edition. The new Aquanaut is also the largest of its series, with a case diameter of 42.2mm, and has drawn similarities to that of the Nautilus ‘Jumbo’ anniversary timepiece Ref 5976/1G. 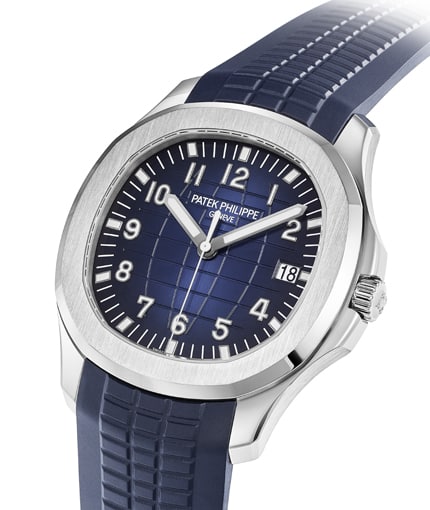 An 18K white-gold case accommodates the self-winding caliber 324 S C movement and define all the quality hallmarks that appeal to fans of classic mechanical horology; traditional haute horlogerie and innovative high-end technology. The movement features a heavy central rotor in 21K gold, which extracts and stores energy from every movement of the wrist and features a rate of accuracy of -3 to +2 seconds per day. The movement is visible through the sapphire-crystal case back and is an adorned work of art to those that consider themselves as a watch enthusiast.

The introduction of a new perpetual calendar has caused a lot of excitement amongst many watch collectors and fans, and the Ref 5320G has literally been crafted with eternity in mind. The Ref 5320G automatically indicates months with 28, 29, and 31 days and every four years recognises the 29th of February as a leap day. The watch also demonstrates an effortless timeless look with a sleek design yet a firm hold on the traditional roots of Patek Philippe. Not many timepieces can boast about affording a glimpse into the past, present and future. 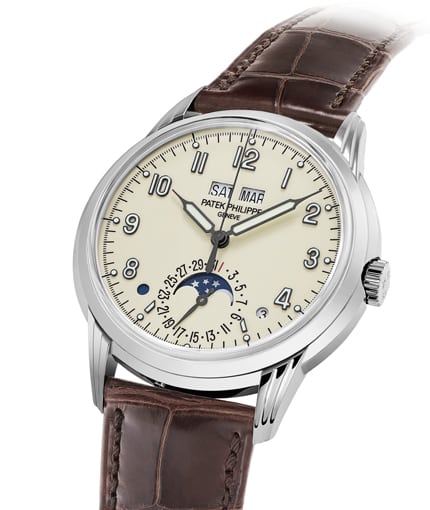 The watch is powered by the caliber 324  S Q, and much like the design of the Ref 5320G melds traditional watchmaking artistry with latest-generation technology. The movement powers minutes, hours, moon phase complication and a perpetual calendar with day, month and leap year apertures. Once again, the inclusion of the Spiromax balance spring and the heavy central rotor in 21K gold allows for this watch to be one of the most reliable watches on the market to date.

The modern, highly precise movement is accommodated in an 18K white-gold case crafted in-house, with a beautiful cream lacquered dial with gold applied numerals with luminescent coating. The watch is finished with the elegant touches of Patek Philippe, a symbol of why they are at the apex of the watch industry, including beautiful sapphire crystal glass and case back glass and a chocolate brown alligator with large square scales and a 18K white gold Calatrava cross folding clasp.

As it turns 40, nothing spotlights the distinctiveness of the ultra-thin self-winding caliber 240 movement as aptly as the skeletonized Calatrava that has been a part of Patek Philippe’s regular collection since 2008. As of 2017, the new Calatrava “Squelette” Ref. 5180/1R in 18K rose gold  5N showcases the extremely rare craft of skeletonization alongside magnificent engravings to imbue the elegant mechanism with enigmatic sensuousness.

The great effort involved in skeletonization and engraving, does not infringe upon any horological principles that the caliber 240 movement was designed for. The timepiece has a tolerance of -3 / +2 seconds per day, as its accuracy rate complies with the considerably high benchmark set by Patek Philippe. The aesthetic appeal and transparency with which the caliber 240 SQU keeps track of time makes it a miniature opus of kinetic art. The work involved requires not only artistic flair and a steady hand, but also calls for skill of the watchmaker who knows the benefits and limitations of skeleton watches. 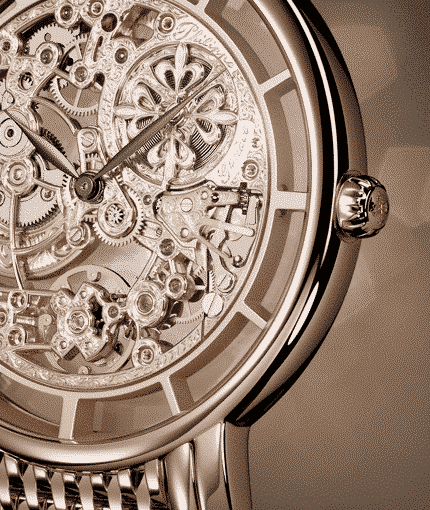 The caliber 240 SQU is housed in a rounded rose-gold Calatrava case which is reduced to a narrow frame, with major emphasis on the movement. With its large-format sapphire crystal glass and caseback, the watch assures the wearer total transparency of the watch, yet offers optimised protection and is water resistant to 30 metres. The watch is finished on a supple bracelet in 18K rose gold, secured with a fold-over clasp.

The new Ref. 6006G Calatrava is one of the Patek Philippe’s debuts for this years Baselworld 2017. The watch features an analog date and seconds subdial, features that all pay homage to the caliber 240 movement’s 40th anniversary. Its safe to say that the watch has a subtle tongue-in-cheek eccentricity to it, with an unorthodox position of the subsidiary seconds dial between 4 and 5 o’clock, which was praised when Patek Philippe released the ultra-thin self-winding Calatrava Ref. 5000 model back in 1991. 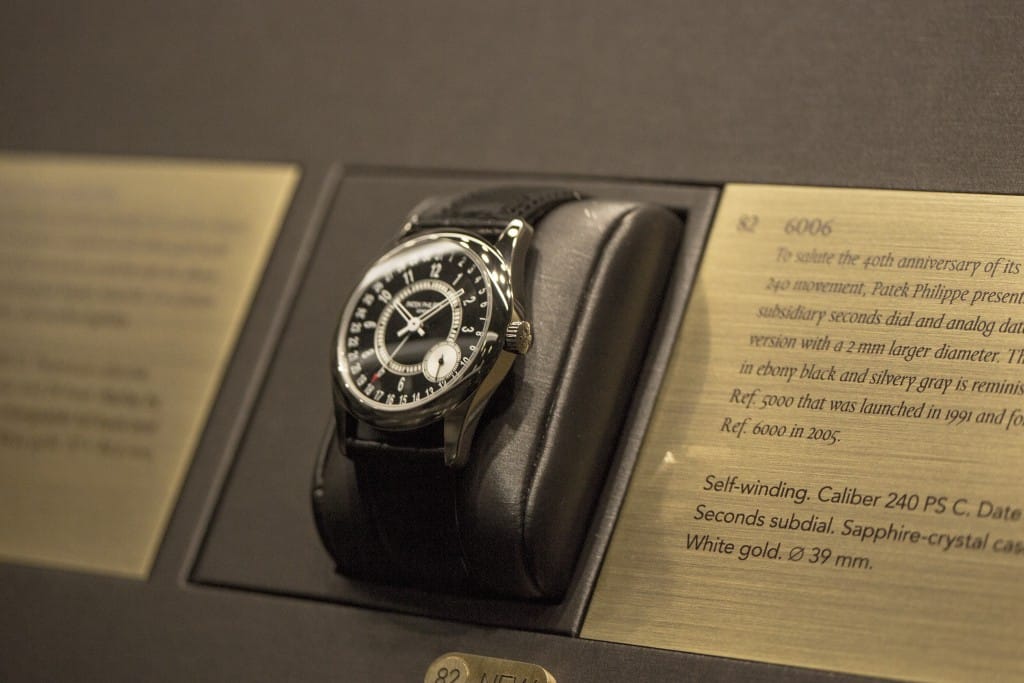 The new Calatrava Ref. 6006 in 18K white gold replaces the watches of the 6000 series launched in 2005. The new edition has been subtly reworked, with an enhanced redesign to accentuate the sleek geometric design of the series. The classic round white-gold case has now been enlarged by 2mm to 39mm, giving the watch extra prominence on the wrist. By increasing the case size, Patek Philippe have only served to create added elegance to the case, highlighting its slender proportions and encouraging more space for a larger dial.

Patek Philippe certainly created a buzz at this years Baselworld. The new releases were not particularly ground-breaking, but instead epitomised what Patek Philippe believe in – tradition. The Swiss manufacture paid tribute to various collections and movements, and re-designed classics to give a modern interpretation on the tradition of watchmaking. The two new Aquanaut timepieces have added value to the Aquanaut series, and it is expected that these pieces will be highly sought after by watch collectors.

Our Highlights From The Baselworld Event 2017

Rolex at Baselworld 2017: A Look At The New Releases Including The Stainless Steel Sky-Dweller And The All New Daytona