Pharrell Williams Watches : Five Watches That Will Blow Your Mind

As the real cool guy of the music business, Pharrell Williams is world renowned for his incredible style and demeanour. As an international superstar, you would only expect that Pharrell Williams would be sporting the very best of the world of watches, and in this case you would be right – as Pharrell particularly enjoys the brands Richard Mille & Audemars Piguet. Here are five mind blowing Pharrell Williams watches to admire.

The friendship between Pharrell and Richard Mille goes way back to 2006, when Richard first heard Pharrell’s lyrics for the Gwen Stefani song featuring Pharrell, ‘Can I have it like that’. Since then Pharrell has gone on to be a true advocate of the brand with a watch collection to prove it. In 2019 Pharrell announced his debut collaboration with Richard Mille and introduced the RM 52-05 Tourbillon.

The Pharrell Williams watch takes inspiration from Williams’ lifelong fascination with space travel through an exquisitely detailed design based around the planet Mars. The baseplate and bridges are made from grade 5 titanium, which is biocompatible, highly corrosion-resistant and a remarkably rigid alloy that enables the gear train to function effortlessly. This kind of material is also frequently used in the aerospace and aeronautics industry adding a further dimension to the watches connection to space.

The decorative titanium bridge that covers most of the dial features a hand painted white astronaut helmet. The Martian landscape that is reflected in the astronauts visor accurately depicts the Mariner Valley where the first-ever Mars probe touched down. The bezel and caseback of the Pharrell Williams watch are made from metallic brown Cermet, which is a hybrid of titanium and ceramic materials, while the inner layer is made from carbon TPT, a layered carbon fiber material that has seen extensive use in aerospace. The crown of the RM 52-05 also adds a subtle nod to the space theme as its intricate design mirrors the wheel of a Mars rover.

Not only is the Richard Mille watch a true masterpiece in terms of functionality, its design has been ingeniously well thought out adding to its luxury appeal. On the sides of the helmet, at 2 o’clock and 10 o’clock, there are two inlaid black sapphires and four inlaid diamonds to create the helmet cameras and floodlights. Limited to only 30 pieces, the RM 52-05 costs a whopping $969,000. Not only has Pharrell Williams collaborated with Richard Mille to create this stunning timepiece but he also boasts an excellent watch collection featuring timepieces from brands such as Richard Mille and Audemars Piguet. Let’s take a look at Pharrell Williams' watch collection.

The technical-aesthetics credo of Richard Mille is to retain a fine balance between watchmaking and the worlds of art, sport and lifestyle. The Richard Mille RM 031 High Performance is the epitome of such beliefs, with the purpose here was to tackle the archetype of haute watchmaking art, with performance as an ‘added bonus’. The watch is yet another symbol of the exceptional watchmaking at Richard Mille, and is not surprising that this is one of Pharrell Williams watches. The watch boasts a remarkable long-term performance with a variation in accuracy of 20 – 30 seconds per month. 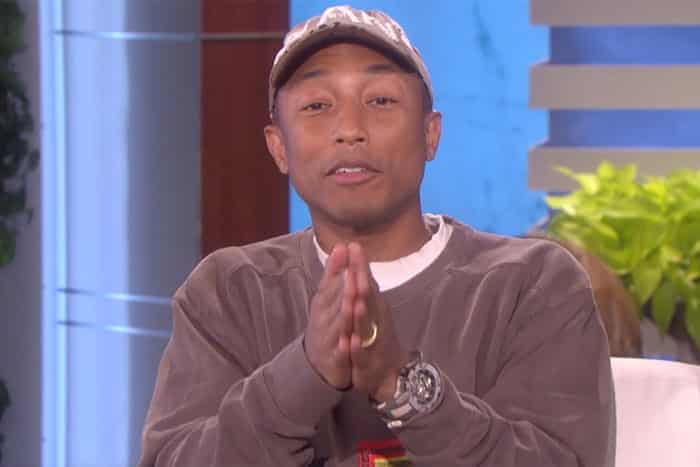 The watch is 50mm in diameter and made from a combination of platinum, grade 5 titanium and 316L stainless steel. The calibre RM 031 manual-winding mechanical movement features hours, minutes, small seconds and function indicator. The round shaped Richard Mille also houses a direct-impulse escapement developed by Audemars Piguet, designed to improve yield transmission to improve accuracy. The RM 031 High Performance is limited to just 10 pieces, and an incredible timepiece to join any serious watch collection.

As one of the most iconic Richard Mille watches to date, the RM 052 Skull Tourbillon must certainly be a favourite with Pharrell Williams. The watch is 42mm in diameter and was released in 2012 as part of 21 limited editions - 15 in titanium, and 6 unique editions set in either 18K rose gold or 18K white gold. The watch's predominant feature, of course, is the visually striking skull-shaped baseplate made of grade 5 titanium. What is so clever about this baseplate, is that it incorporates the movement. The upper and lower jaws hold the ruby of the tourbillon cage, and the back of the skull is also the movement's center bridge.The four bridges that connect the movement to the case are arranged in a 'skull-and-crossbones' type designs to really give this watch a special edge. 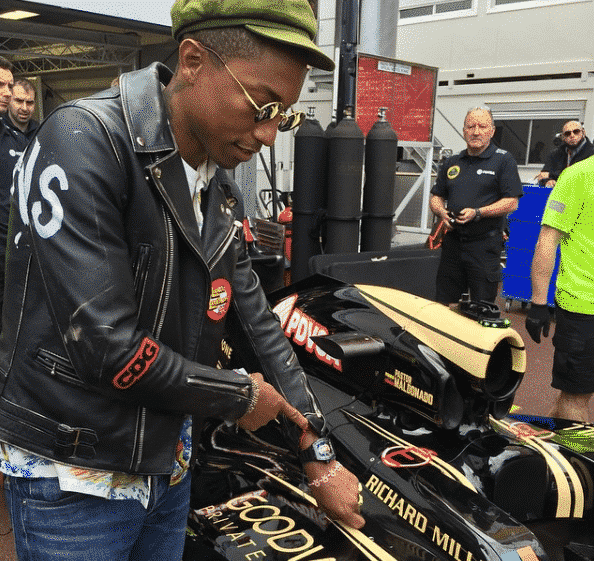 The watch holds a RM 052 manual winding tourbillon movement with hours and minutes. Amongst other technical touches are a free-sprung balance which provides protection from shocks and allows for more precise adjustment, a fast-rotating barrel for increased performance and a barrel pawl with progressive recoil which helps in distributing the mainspring's internal intension. The case is finished with 20 spline screws in grade 5 titanium and abrasion resistant washers in 316L stainless steel.

The Audemars Piguet Royal Oak Concept Carbone Tourbillon is also another incredible watch in the Pharrell William's private watch collection. The watch is 44mm in diameter, and crafted with forged carbon case, with a black ceramic bezel, blackened titanium case back ring with a black ceramic screw-locked crown and push pieces. The mainplate of the movement acts as the dial in this watch, and features black inner bezel scale. The watch is finished beautifully with a hand-stitched 'large square scale' black alligator strap with titanium folding clasp. 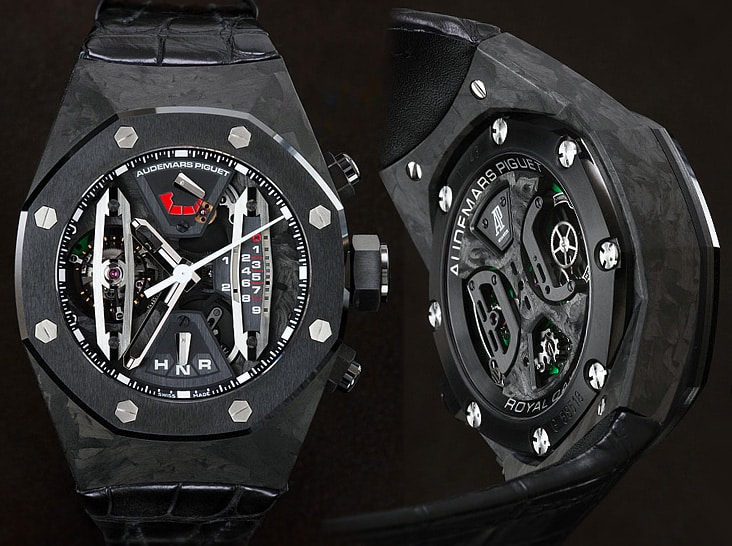 The hand-wound tourbillon watch features a linear chronograph minute counter with central sweep seconds hand, function selection indicator and power-reserve indication. The watch is powered by the groundbreaking Calibre 2895 movement, developed and manufactured entirely by Audemars Piguet. The calibre beats at 21,600 vibrations per hour (3Hz) and features a staggering power reserve of 237-hours. Despite not being a limited edition piece, it's fair to say you are unlikely to see this piece on the wrist - unless you see Pharrell Williams.

The Richard Mille RM 027-01 again symbolises the incredible watchmaking craft at Richard Mille. Inspired by the forces at play during a competitive and high-speed game of tennis, the RM 027-01 Nadal Tourbillon represents a new generation of haute horology specifically designed for the sports industry. The case of RM 027-01 is made from an extremely strong anthracite polymer injected with carbon nanotubes to improve the watch lightness and rigidity. The front crystal also features special anti-reflective treatment that ensures optimum rigidity and extreme toughness. 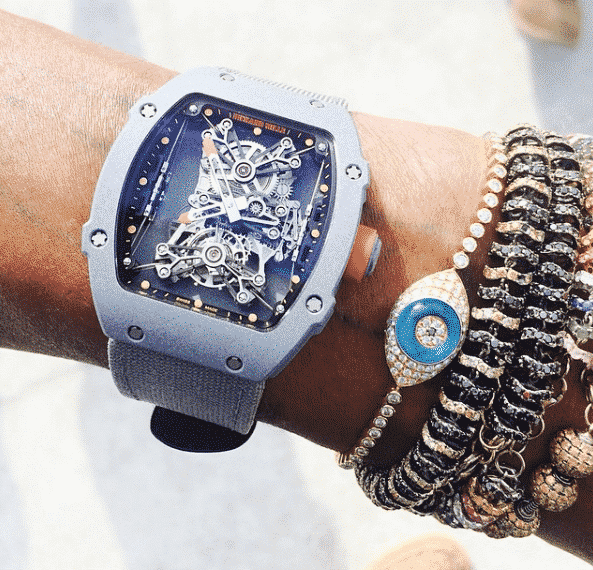 The special Calibre RM 027-01 tourbillon movement powers minutes and hours function. The watch also features an innovative cable-suspension mechanism to ensure the watch can withstand accelerations of over 5,000 Gs (G-Force). This is done by securing the movement via cables which are threaded through a series of upper and lower pulleys located at each corner of the inner case. Once the watchmaker has threaded the cables, he tensions them by winding a central tensioner ring using a special tool. The watch is a serious example of innovative haute horology and a suitable player in the collection of Pharrell Williams.

When you are an international superstar with basically unlimited money source, I guess it's only natural for you to go for an original Richard Mille watch. In this instance, although we don't know much about Pharrell's RM 056-02, we can look at the standard edition RM 056-02 and then compare it to Pharrell's watch. First thing to mention is the fact that the watch is made entirely from sapphire crystal and was created specifically for the Watches & Wonders event in Hong Kong. Aside from being a sapphire tourbillon watch, the new movement of the watch takes its inspiration from the mechanical architecture of the RM 027-01 (handy, read above) and the cable suspended movement. Using this mechanical concept, along with the use of sapphire crystal give an ultimate expression of weightlessness and transparency with the world of haute horology. 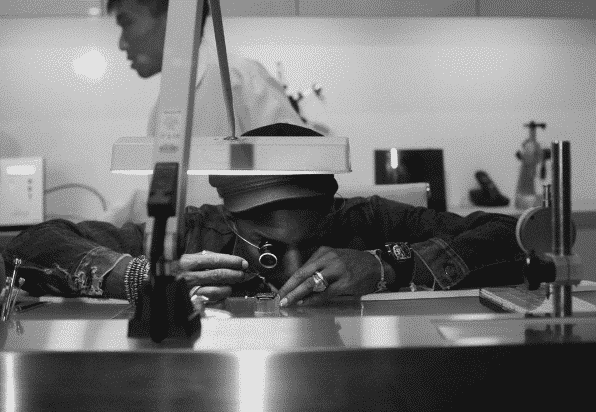 Photo of Pharrell Williams at the Richard Mille Singapore lab[/caption]

What is truly special about this watch is the sheer number of hours employed by Richard Mille in creating the spectacular sapphire case and the design and manufacture of the new cable suspended tourbillon movement. The case alone is said to have been the biggest challenge, simply as the delicate nature of sapphire, and is said to have taken over 1000 hours to craft each individual case. In the case of the mystery Pharrell Williams RM 056-02, it is believed the US superstar has the same watch just with a black ceramic winding crown. Although Pharrell William's watch is an original piece, the standard issue RM 056-02 is limited to just 10 pieces worldwide. 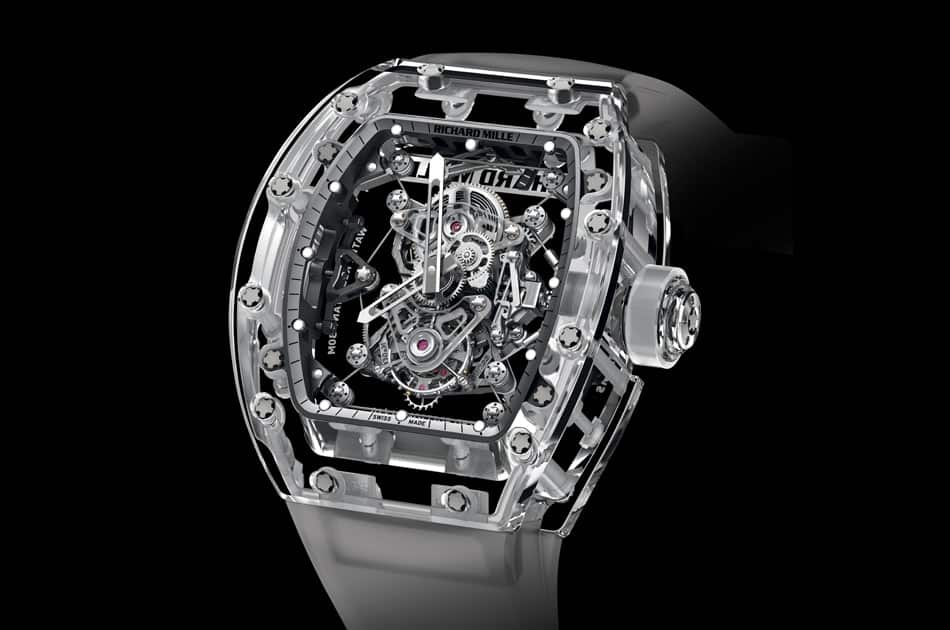 Feeling inspired by Pharrell Williams watches? Why not check out what new timepieces Luxe Watches has to offer. Shop new in.