Neatly before this year’s French Open, Richard Mille has just released the new instalment of the Richard Mille RM 27-03 Rafael Nadal collection – and it’s quite a sight. The watch features the very first “Tourbillon Shock Resistance” which can withstand a staggering 10,000 G-Force units. The watch will be centre stage on the wrist of Rafael Nadal during the Roland Garros – which will undoubtedly be claimed by the legendary Spanish tennis star. 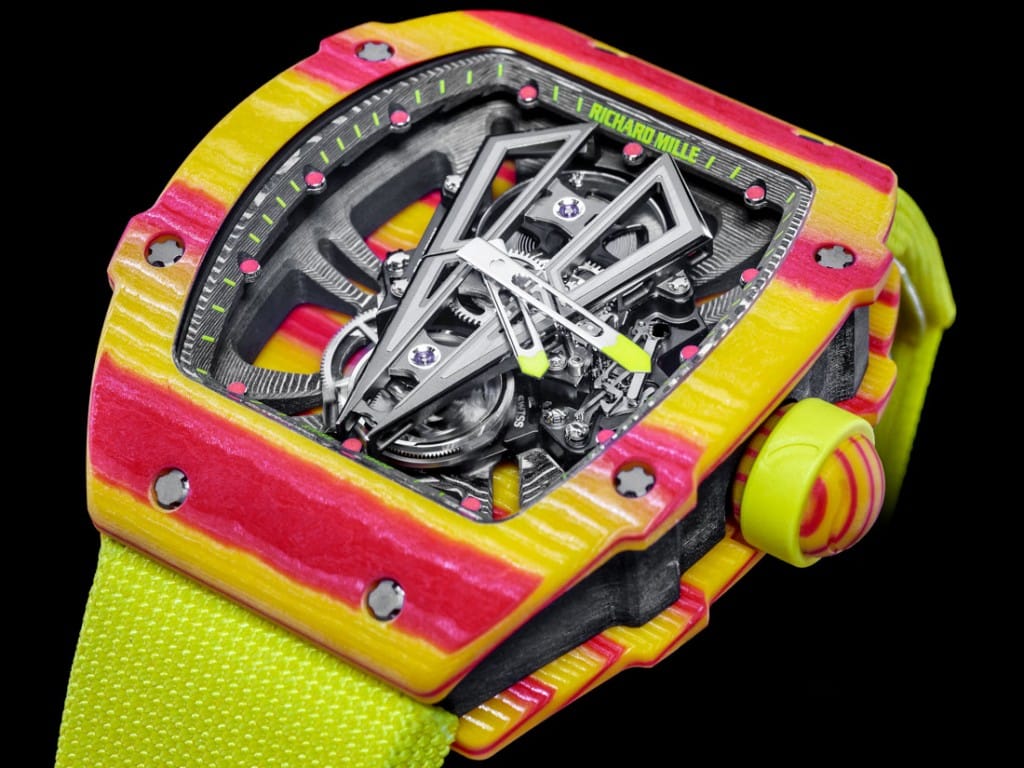 The watch features its signature high durability through a newer construction of the case and movement as one singular unit. The case is TPT Quartz which is connected to a unibody baseplate in Carbon TPT, to which Grade 5 titanium bridges and reinforcements have been fitted. The inspiration for this comes from the Formula One industry. 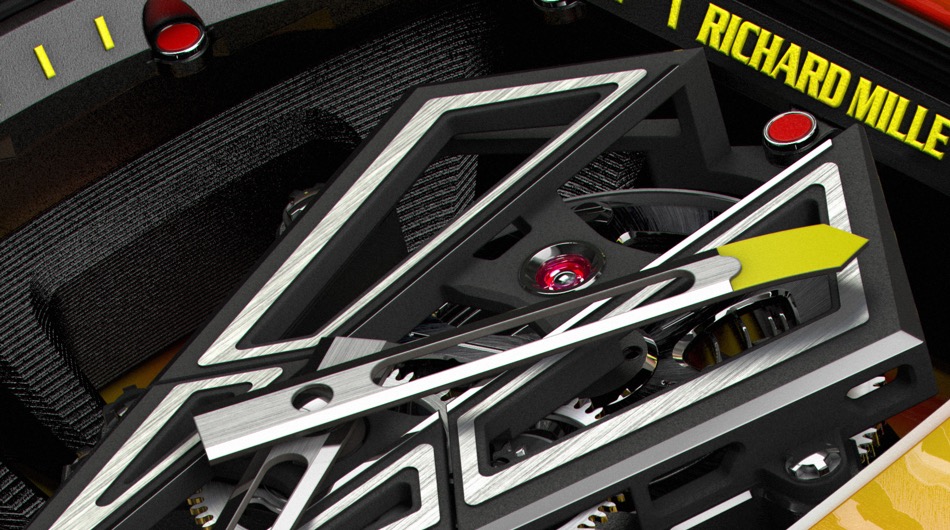 Aesthetically, the timepiece pays homage to the heritage and character of Rafael Nadal, with striking yellow and red hues of the Quartz TPT case. The Carbon TPT is made up of multiple layers of parallel filaments which is made possible by separating each individual carbon thread and gives the visible aesthetics and texture of the case. The intense burst of colour from the RM 27-03 is directly from injecting fine layers of silica with tinted resin into stacks and then heated to 120ºC to merge seamlessly. The watch is incredibly vivid and the definition of a sports watch – and so it was only natural to release on the eve of one of the most iconic tennis tournaments the world over.

The watch features the insanely impressive calibre RM 27-03 manual winding tourbillon movement which powers hours and minutes. However, what really stands out is the V-shaped structure that holds the movement together and reinforces the idea of how durable this watch is. This new movement shape is a clear example of the pioneering work at Richard Mille in their quest for stunning aesthetics with innovative movement creations. 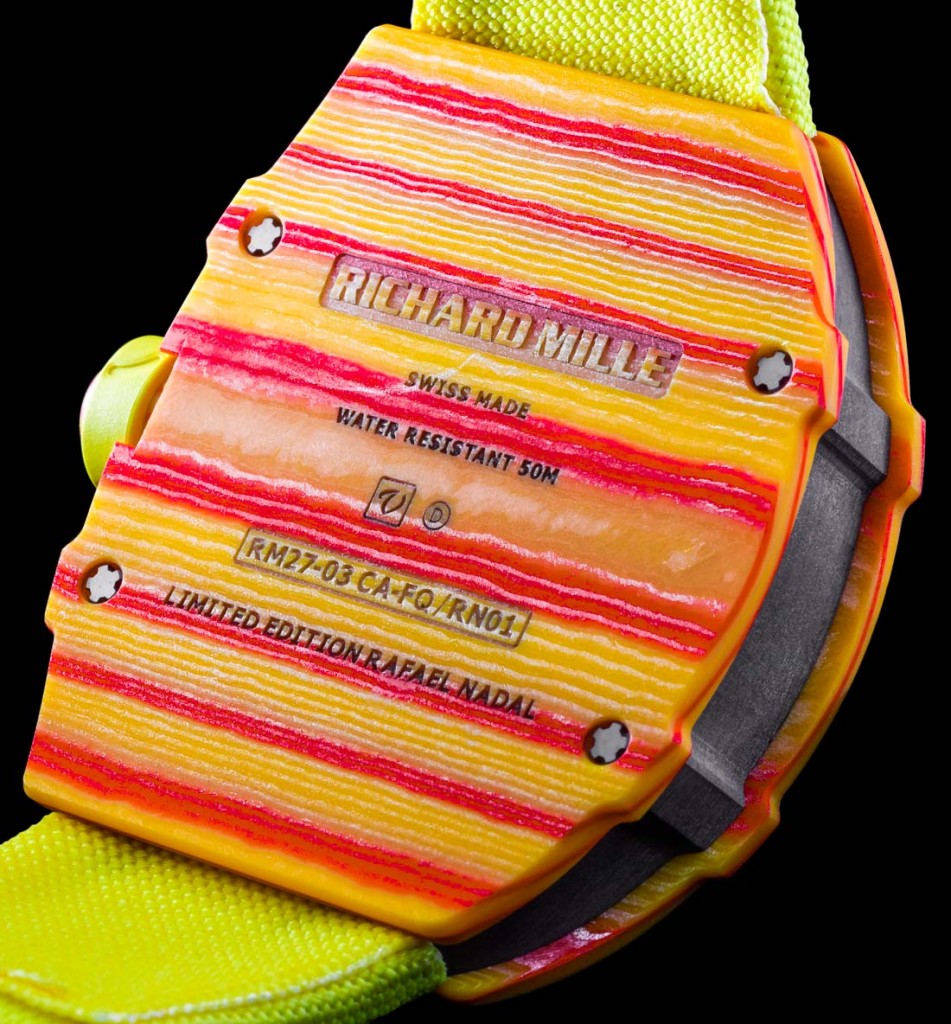 The highly stylish, sharp and streamlined curves of the skeletonised bridges that encapsulate the barrel, the balance wheel and the mechanical winding tourbillon are said to be inspired by a bull, a traditional symbol of Spain and homeland of Rafael Nadal. The movement is finished with the same level of quality you would expect from Richard Mille. Each individual part of the movement is hand-polished to ensure that the movement sparkles and to emphasise that each and every part of this special timepiece is important.

Yet another first, and very cool feature of the RM 27-03 is the torque limiting crown. Made from a combination of Carbon and Quartz TPT, the crown is in the shape of a tennis ball, and even features the slight indentations of the white trim of the tennis ball. The torque limiting crown is not entirely new with Richard Mille, and is designed to prevent accidental overwinding, which can lead to damage to the winding stem or extreme pressure to the mainspring barrel.

The one-minute tourbillon runs at an impressive 3 HZ and can last an estimated 70 hours before the fast-rotating barrel needs to be manually rewound. 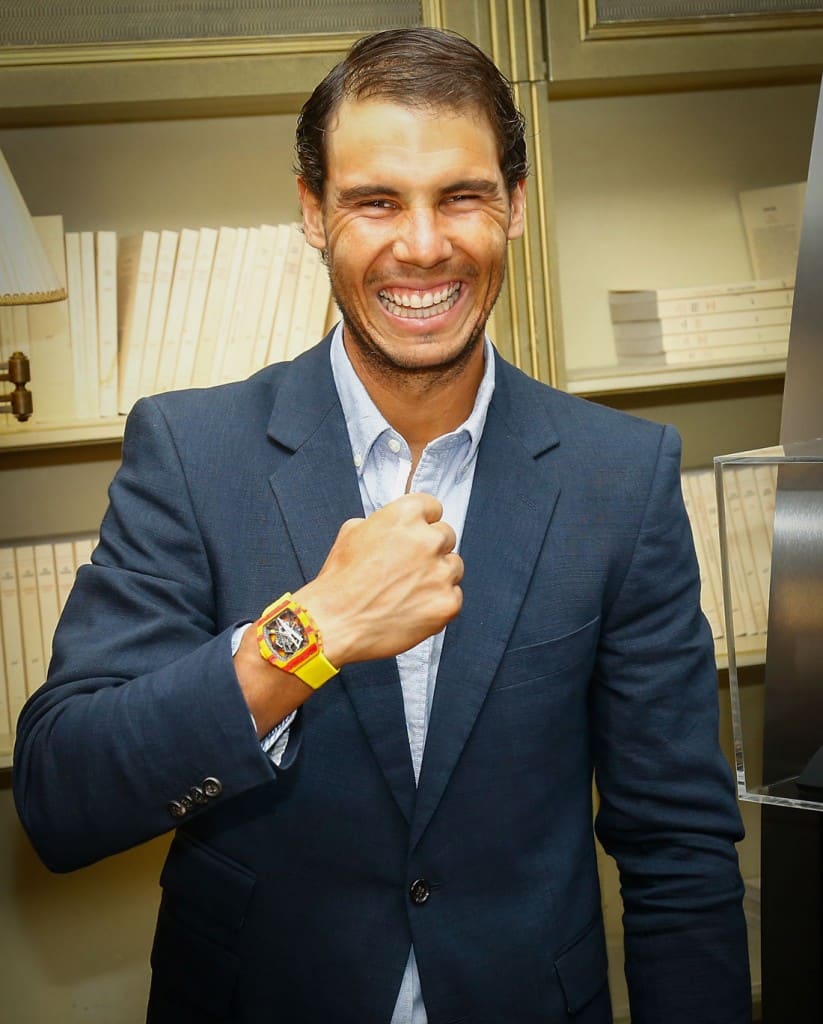 The strap on the Richard Mille RM 27-03 Rafael Nadal is completed by a Richard Mille ‘comfort strap’, made from a combination of elastics, making the watch extremely comfortable and lightweight. Given the weight and size of this watch (40.30 x 47.77 mm), this would certainly be considered as the most comfortable watch in existence, almost like a second skin. There is no doubt this watch is special, but also consider this watch is a limited edition of just 50 pieces worldwide, giving the watch an almost legend quality to it. The price tag for this legend? It has been rumoured that this timepiece will cost a cool CHF 766,800.