You would think that both the watch and art industries have not that much in common with each other – well think again. Both industries rely on the aesthetic appeal of what they are showing with an underlying appreciation of the technical ability of the creator. It’s not surprising then that we see more and more artist collaborations within the watch industry, often to inject much more vibrancy into a timepiece and to create something different from the usual. Here are 6 stunning artist collaborations you need to know about!

The Richard Mille RM 68-01 Tourbillon Cyril Kongo made haute history when it was released. Never before has a work of art thus taken shape on the bridges and baseplate of a watch, giving the watch a whole new dimension, and allowing the artist to use the timepiece as a canvas. The watch is cased in the highly scratch resistant TZP black ceramic material with a NTPT carbon caseband. The RM 68-01 caliber is entirely hand-painted by Cyril Kongo, using a combination of spray paint and acrylic paint ensuring a visual effect never before seen at Richard Mille. Each watch is unique, giving the feel that each watch is truly special. 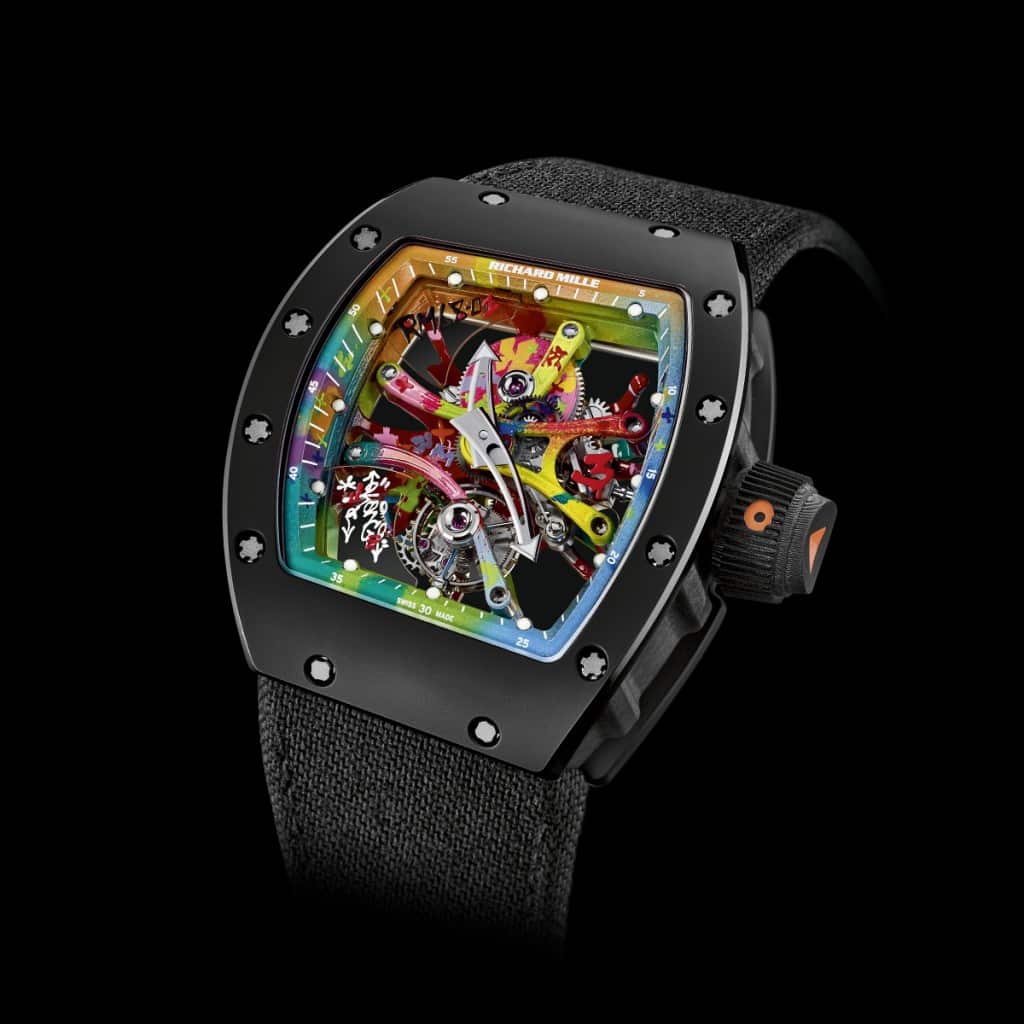 Paris based artist Cyril Kongo is a self-taught and internationally acclaimed graffiti artist, with over 20 years working as an out and out artist. Kongo first attracted attention as a tagger and graffiti artist on the urban art scene in Paris. Giving up the streets of Paris for actual canvas, the artworks of Kongo is inspired by frescos and wall paintings, his works confidently transforms graffiti into the realm of fine art.

The Corum Bubble watch ‘Mona Lisa’, released in 2016, gives a new contemporary twist on a haute horologerie classic. The watches are available in either the 42mm or 47mm, the latter of which are limited to just 88 pieces worldwide. The option of a silver or bright purple watchcase playfully compliments the dial artistry, while the silver curve of the hands delicately trace the design. The depiction of the Mona Lisa, ‘a face that is recognisable to all’, is a modern interpretation of the great piece of artwork painted originally by Leonardo Da Vinci. 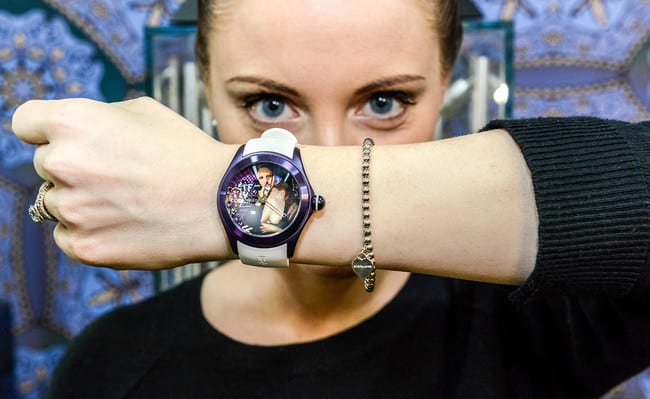 Canadian-Italian artist Elisabetta Fantone features in some of the most prestigious art galleries in the world. Her intricate and colourful paintings make her a stand out artist in the contemporary art category, and celebrity clients include the late great Muhammed Ali, Celine Dion & the Kardashians, to name a few. The vibrancy of Elisabetta’s artwork is a true testament to her remarkable talents that always shine through her artistic endeavours.

The Audemars Piguet Royal Oak Concept Supersonnerie is a piece of art by itself, and doesn’t need the help of any visual artists. Instead, Audemars Piguet required the services of DJ Surkin & his music platform Gener8ion to create the four unique distinctive chimes that the timepiece plays at different points of the day. The Royal Oak Concept Supersonnerie features a 44mm titanium with glare-proofed sapphire crystal, titanium bezel, black ceramic screw-locked crown and black ceramic and titanium push-pieces. The black openworked dial shows off the impressive craftsmanship by Audemars Piguet. 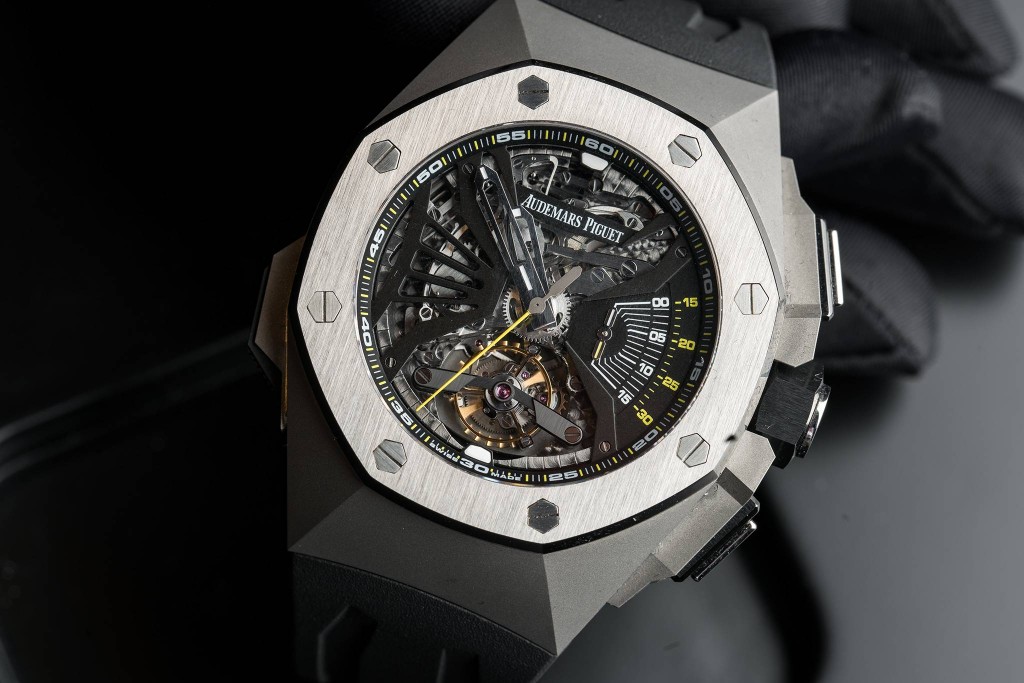 Electro DJ and music producer Benoit Heinz, who goes by the name of Surkin, started Gener8ion to draw together a group of like-minded artists to work on special collaboration works. One of the most recent collaborations was with British rapper MIA.

Hublot have several collaboration variations of the Big Bang, but none have been as successful as the new 2016 Big Bang Sang Bleu model, designed by tattoo artist Maxime Büchi. The 45mm model features a whole new time display in which the hands are replaced by octagonal discs, and organized from the largest to the smallest time unit, with the hours on the outer edge, followed by the minutes and seconds. The watch is available in black ceramic, Hublot’s King Gold and titanium pave and features the classic Unico HUB 1213. The watch has single-handedly got the entire tattoo community talking about watches and watch enthusiasts talking about tattoos, which in itself is a true celebration os this watch. This watch release could be the start of an unlikely yet incredible partnership of industries. 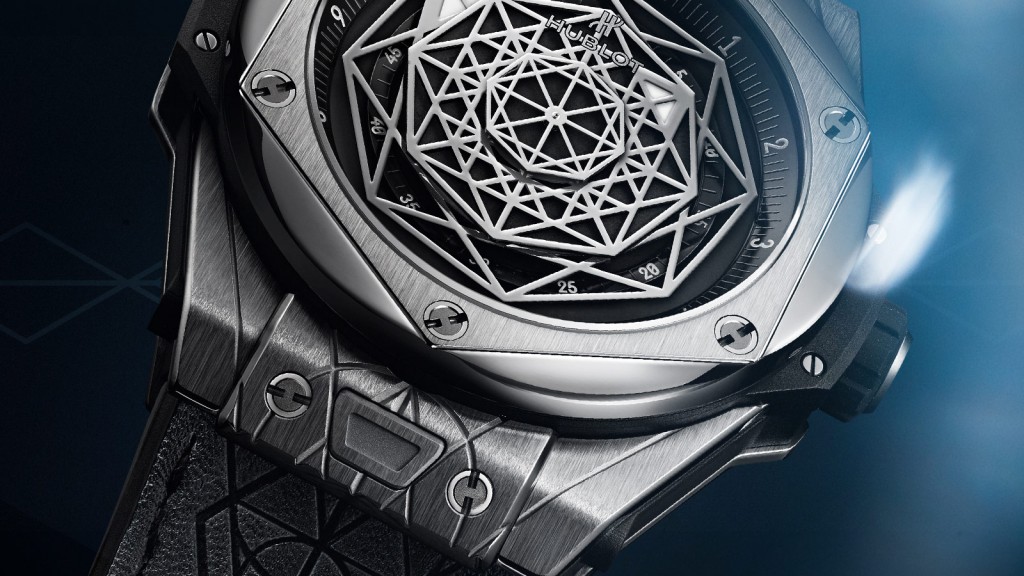 Sang Bleu is a multidisciplinary artistic platform founded by swiss-born tattoo artist Maxime Büchi. The Sang Bleu studio, based in London, opened its’ doors in 2014 and houses the very best tattoo artists from around the world, under the guidance of Maxime Büchi. Within the tattoo community, Büchi is considered to be the very best and has inked the likes of Kanye West and Adam Lambert.

The Romain Jerome Tattoo-DNA by XOIL is the meeting of two personalities and the result of genuine collaborative between the prestigious Swiss manufacture and tattoo artist. The watch features a sumptuous half skeleton dial half enamel grand feu dial, giving a very distinctive clash of modern vs traditional timekeeping. Intricate details make this a beautiful timepiece, with hands that are shaped as tattoo needles and an authentic leather strap that has been tattooed by XOIL, each strap and timepiece is completely unique and are limited to just 25 pieces worldwide. 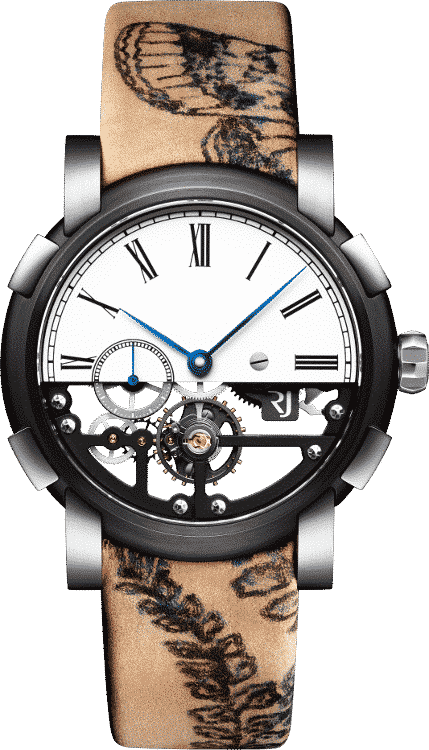 Late December 2016, TAG Heuer invited world renowned contemporary street artist Alec Monopoly to be the official brand’s ‘Art Provocateur’ and to make a positive contribution towards the artistic effects of TAG Heuer. Despite the popular Swiss manufacturer not releasing an official watch designed by Alec Monopoly, let’s discuss the watch given by TAG Heuer to Alec Monopoly to celebrate the partnership. According to the artists Instagram, the artists received a custom made TAG Heuer Carrera Tourbillon in white gold with original set diamond case. The watch also features specks of blue and pink paint giving an artistic interpretation of an already piece of art in the watch industry. 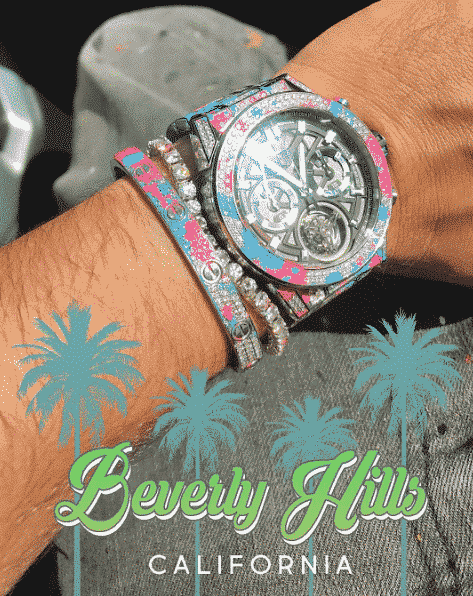 Alec Monopoly is an alias of an unidentified graffiti artist, usually seen with his face hidden and sporting a top hat, the artist made his name on the streets of New York. Alec Monopoly is renowned for his use of cartoon characters to express the lifestyles of the rich and famous, using characters such as Richie Rich and Mr. Monopoly. Celebrity clients include the likes of Adrien Brody and Robert De Niro.

The Watches Of The Masters Tournament: Golf’s Finest Timepieces On Show