The Most Exclusive Watchmaker? Meet The Company That Hand Deliver Their Watches | Luxe Watches

The Most Exclusive Watchmaker? Meet The Company That Hand Deliver Their Watches

Grönefeld is probably a name you’ve never heard when it comes to luxury watches, or maybe very rarely. This is probably because Dutch-based the watchmaker makes no more than 30 timepieces a year, and has a workforce of 12. The founders pride the company on exclusivity, and as a result strive to offer the greatest customer service. The business was founded in 2008 by two talented watchmakers Tim and Bart Grönefeld (both trained at Renaud and Papi), however went on to admit that starting the luxury watch brand in 2008 was bad timing. How can such a small, family run, business afford to hand deliver it’s watches worldwide? Well, when your watches are costing approximately £120,000 a piece, I’m sure they can find the money to do so.

“When we sell a watch we always try to deliver our creation in person to the customer, regardless of where they are in the world,” said co-founder Tim Grönefeld. “We visit them and organize a dinner or small event where we hand over the watch.” 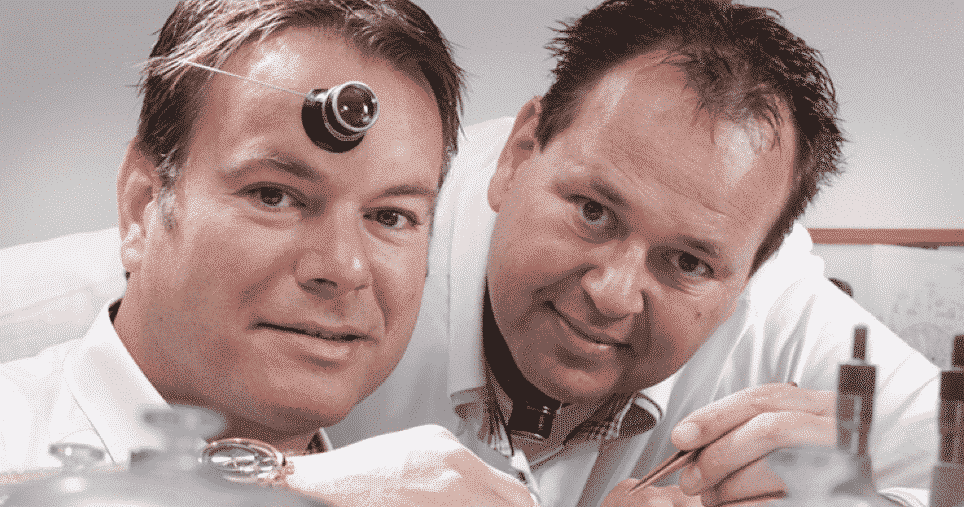 Switzerland is very much at the forefront when it comes to the world of luxury watches. Spearheaded by brands such as Rolex, Patek Philippe, Swatch Group (who owns Omega and Longines), and Richemont (whose brands include IWC and Jaeger Le-Coultre), Swiss watch exports totaled 20.6bn Swiss francs in 2013 (approx. £13.5bn). Overall, there are about 90 watchmakers in Switzerland. The leader, Rolex, makes up to 2000 watches a day. On the other hand there are boutique watchmakers who produce fewer than 100 timepieces a year. Despite such dominance from Switzerland in the sector, other European countries are also home to luxury watchmakers, often little family run firms such as Grönefeld.

Grönefeld understood this. They realised they couldn’t compete with the huge marketing and sponsorship budgets brands like Rolex have set aside. They had to think differently, and become more innovative. By making their watches super exclusive, and made only to order, the demand is created and the business cash flows itself.

The company’s mantra is they “specialise in complicated watches, not simple watches.” Their first watch was a Tourbillon Minute Repeater, made with the aim to really put down a mark in the luxury watch world, and show off their watchmaking credentials. In 2011, Grönefeld released the One Hertz, the world’s first series wristwatch with independent dead seconds and featuring a completely new movement, the G-02 calibre. The timepiece won many prestigious accolades, such as the 0024 WatchWorld Watch of the Year contest in 2011 and was also voted Watch of the Year in the same year by members of watch forum ‘Timezone’. Now their latest iteration is the Parallax Tourbillon, a beautifully sleek, yet complicated watch released in 2014. Similarly to the One Hertz, the Parallax Tourbillon earned many awards, including one of the most prestigious awards in the watchmaking industry: the Tourbillon Watch Prize of the Grand Prix d’Horlogerie de Genève. 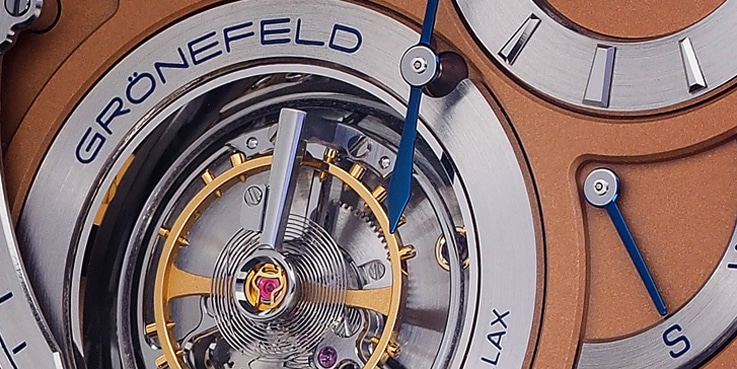 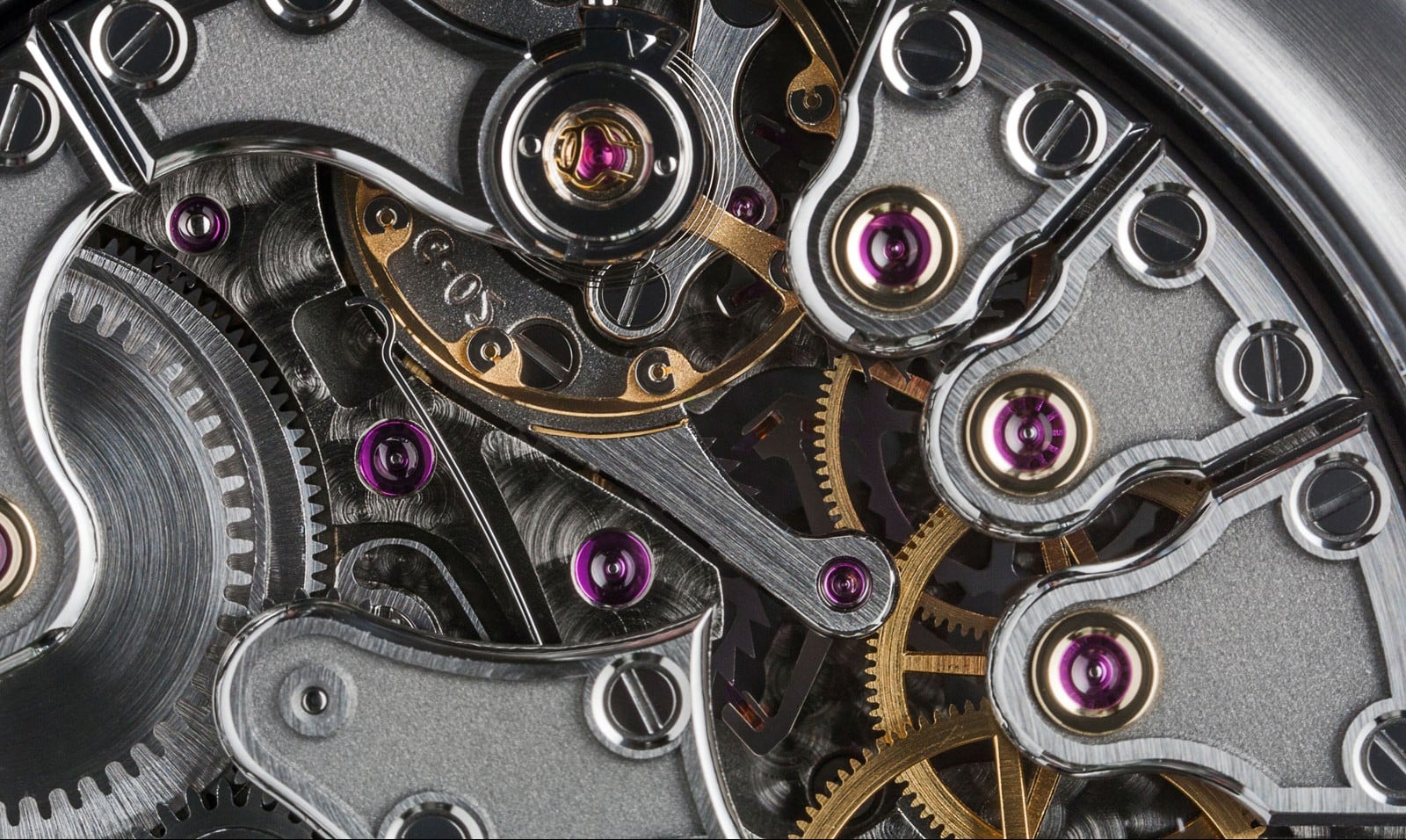 The Grönefeld brothers use stainless steel bridges exclusively for their movements. Why? Well, not only is stainless steel harder and more durable than the more commonly used steel and brass, the metal gleams when polished to a mirror finish. Don’t be fooled though, it is no simple task to achieve a perfect finish in stainless steel. It takes a master watchmaker up to four times longer than polishing brass. It has to be said, the attention to details and execution in Grönefeld watches are second to none.

To this day, the two brothers are still hands-on when it comes to the actual watchmaking. They do nearly every casing up themselves, and they do the first five movements from every new caliber, from finishing to assembling. This is mainly so they know what is exactly inside. After that, they teach the watchmakers so they can do their own thing, although the siblings still check and help them.

The people who buy these watches are predominantly watch collectors, say Grönefeld. They appreciate and understand the high-end finishing, and have an eye for high-end watches. Sometimes, people buy the watches just because they like the story behind the brand.

Overall, that’s what drew me, and their customers, to the brand: the story. Some companies get so big that they can perhaps lose that story that really connects the customer to the product. The Grönefeld brothers have reverted to brand values to compete with the major players, alongside their watchmaking skills. Remember the name.

The Hublot Big Bang Alarm Repeater: Probably The Nicest Way To Be Woken Up, Ever.