For 2016, Cartier have gone back to basics and refreshed two of their most popular models in a black carbon ADLC (Amorphous Diamond Like Carbon) coating. The Cartier Santos 100 XL and the Ballon Bleu de Cartier aren’t the first pieces to be done in the carbon cases, but Cartier are now offering buyers a full blacked-out piece. Perhaps Cartier are catering to the younger market, as the carbon offers a contemporary and sporty look. Some advantages of the new ADLC coating is the increased scratch-resistance and increased shock-resistance.

Cartier have been making carbon watches for many years now, but have now found a more affordable non-gold housing for their new in-house movement. The Santos 100 Carbon is the large model, and measures 41.3mm. The other new release, the Ballon Bleu, also has a ADLC-coated steel case that is 42mm wide. Where you no longer get the classic Cartier blue hands, you instead get the lume-treated sword hands for increased functionality. To break the monochromatic look, Cartier have added the red seconds hand which really stands out and works with it. Cartier have, however, stuck to it’s roots with the blue Sapphire crown. 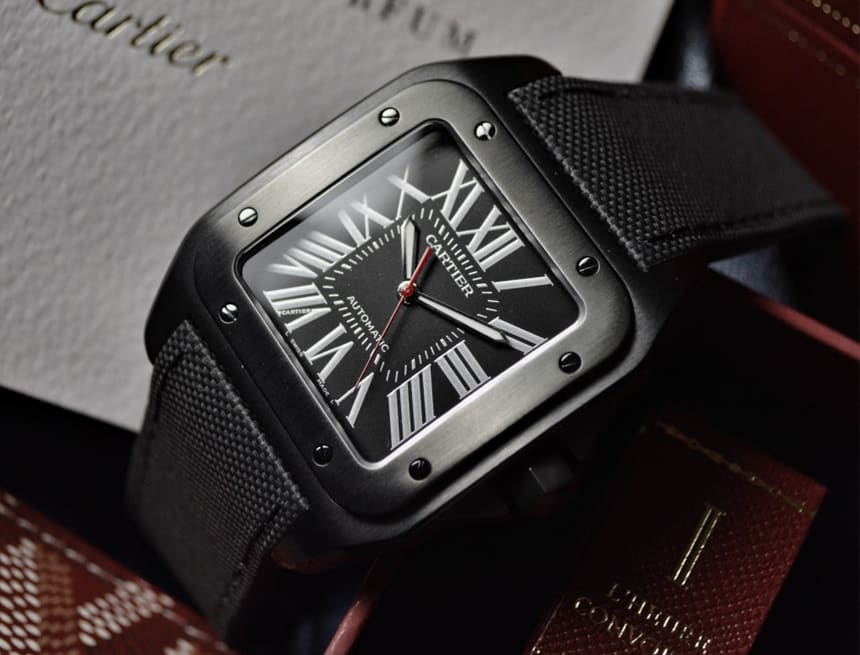 The success of the Santos 100 series is without doubt due to it’s masculinity. The size is a bit of an anomaly for Cartier watches and caters to a different audience. The Santos 100 was born as a celebration of 100 years of the Santos collection in 2004, designed in line with the modern trend of over-sized watches.

A few years later, Cartier released the ADLC version as black watches were very popular, but was subsequently discontinued as is the way with Cartier to make room for new models.

2016 sees the return of the ADLC version, the major difference to it’s predecessor being the upgraded movement. The 1847 MC automatic movement offers the user a high level of accuracy, as well as a very respectable 42 hour power reserve. The watch has been given a sporty textile strap that will increase comfort and compliment the aesthetics. 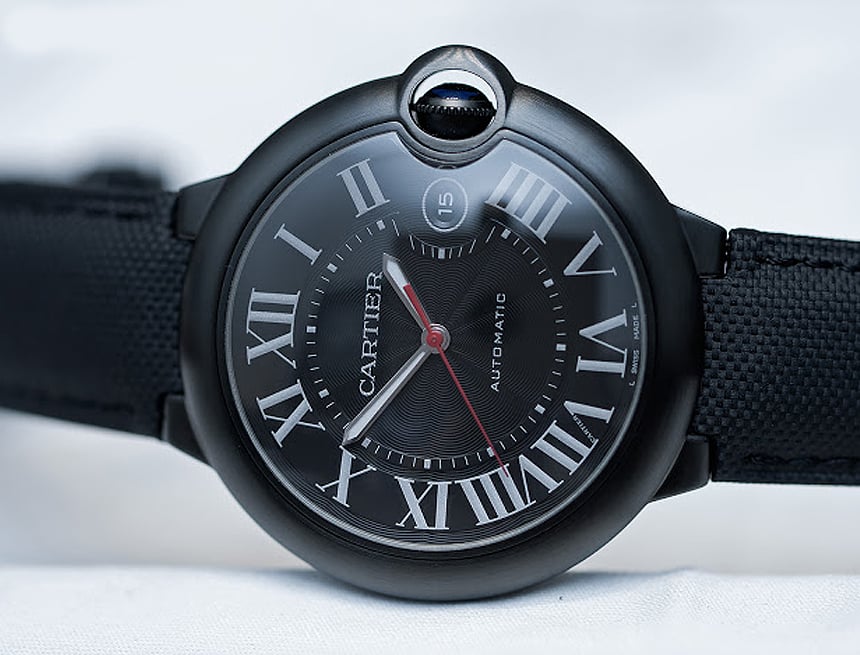 It could be argued that the Ballon Bleu De Cartier Carbon is the more shocking of the two new models. Where the Santos 100 has always been more garish and ‘out-there’, the Ballon Bleu series has always represented class and elegance as it has been made from steel or precious metals, so this new shift in design to a more contemporary style is a big change.

The pebble-shaped watch won’t be as popular, well at least in my opinion and the general reception received when they were both announced at SIHH 2016, as the Santos 100 Carbon, however this will definitely draw the younger demographic. The use of the ADLC makes this a great everyday watch, with the hard scratch-resistant case making it even great for use in the gym.

The 42mm round case is made out of steel and ADLC, and features a fluted crown set with a synthetic cabochon-shaped spinel. Like the Santos 100, this watch comes with a sporty fabric strap and features an ADLC buckle. Priced only a couple of hundred pounds above its non-ADLC siblings, this is a lot of watch for the money.