Looking over our list of past and upcoming auctions, it seems that spring has been, and will be, the busiest season of 2018. This month has been particularly special for Phillips auctioneers, because they hosted their seventh annual Geneva watch sale, and the highly anticipated ‘Daytona Ultimatum’ thematic auction, all in just one weekend.

To keep things short and sweet, we’ve chosen a few special pieces from the auctions that took place over the weekend, to give you a small taster of what went on.

Approximately 184 rare and collectible watches went under the hammer last weekend, and although some didn’t quite receive the attention they deserved, others caused a huge rush of excitement.

One particular watch that performed exceptionally well is this stunning white gold Omega. The elegant 18-carat white gold 32.5mm case features a clean and simple dial (with only a basic seconds sub dial at 6 o’clock), and a Tiffany & Co. diamond set bezel.

The most attractive feature of this timepiece however is not it’s beauty (although it is an extremely attractive watch), but more so its historical significance. In 1961 RCA Records presented the “King of Rock and Roll” Elvis Presley with this exact watch to celebrate his success of selling 75 million records. An engraving to the “King” himself is visible on the watch’s gold case back.

The second most expensive lot at last weeks auction was this exceptional Patek Philippe World Time. What makes this piece so special is its rarity. Only 115 of ref. 1415 were ever made, but even fewer feature the beautifully handcrafted “Eurasia” map dial. This immaculate vintage piece features a 31mm yellow gold case, and exhibits a second time zone wheel and an enlarged gold bezel, engraved with major cities around the globe, to give the wearer the option of setting dual time display.

Although the world time complication isn’t exclusive to Patek Philippe, it was Patek who made the classic appearance of the complication renowned worldwide. 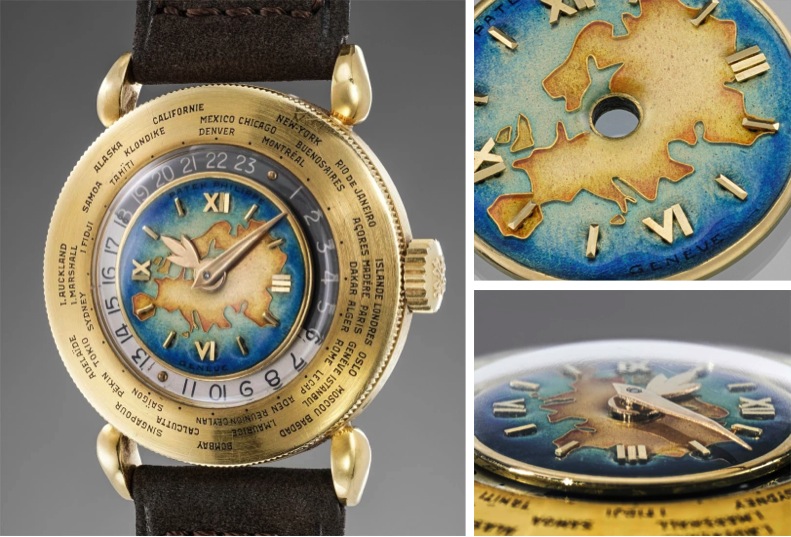 Just a quick update for those of you who have read over our pre-coverage post about the Daytona Ultimatum. The illustrious white gold ‘Unicorn’, a watch Phillips claims is the world’s rarest Rolex, was estimated to sell for around $3 million – $5 million.

However last weekend, collectors rushed at the opportunity to bid on this exceptional timepiece, and the final hammer price was almost $6 million. All the proceeds from this particular sale are to go directly to the Child Action charity as requested by its previous owner. 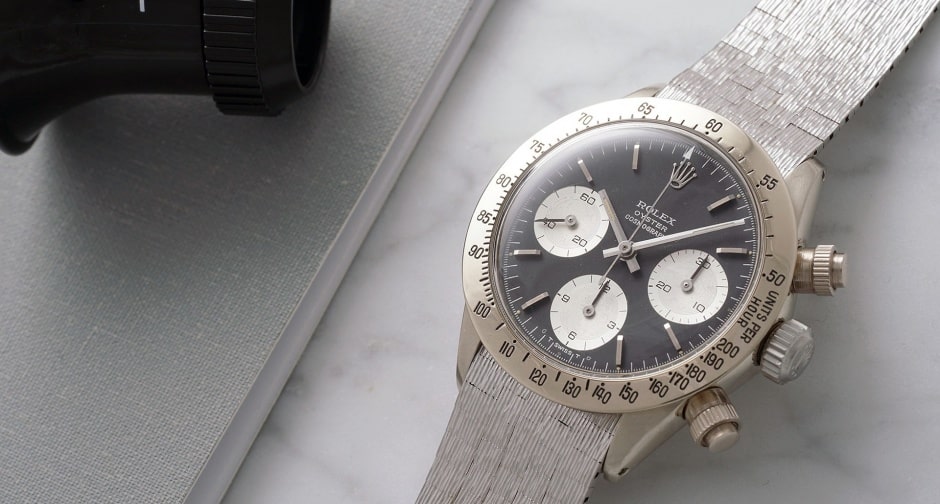 To find out more about this one-of-a-kind sports watch, click here.

Important Modern and Vintage Timepieces (13 May 2018)

Last Saturday’s auction saw a total sales figure of $9.9million. It may not have been a record-breaker, but some of the wristwatches up for sale were quite impressive.

Lot. 607 is an exceptional example of a vintage Rolex GMT-Master II ref. 6542. The incredibly rare timepiece features a well-preserved 18-carat yellow gold bracelet and case, and a unique brown dial and matching bakelite bezel. The story behind how the owner acquired this watch is just as remarkable as the watch itself. In 1960 a SISL member jumped into a freezing lake to save a drowning child. As way of expressing his gratitude, the father of the child removed this Rolex from his wrist and gifted it to the rescuer.

Half a century later, the watch has barely been worn, and the owner who was oblivious to its real worth, decided to take it to auction. The ref. 6542 models were produced in small numbers and only for a short amount of time. So it’s rare to come across one of these golden beauties, never mind one that is in excellent condition!

If you’d like to know more about Antiquorum’s auction last weekend, read their auction summary here.