The Watches Of Formula 1: A Series Of Drivers and Their Watches - Part Two | Luxe Watches

The Watches Of Formula 1: A Series Of Drivers and Their Watches – Part Two

Continuing from our Part One of ‘The Watches Of Formula 1’, the watches of these drivers are no doubt going to blow you away. 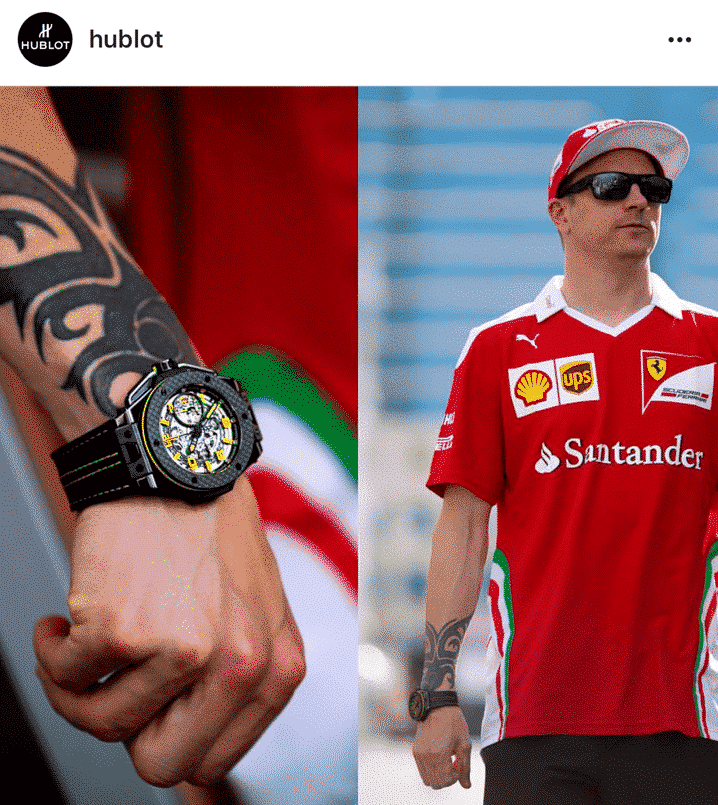 The Finnish legend of the sport rose to notoriety when at Sauber Racing at the age of 21 and was quickly seen as one of the finest drivers of his generation. After the much success, including a World Championship, the Finn joined the world renowned Ferrari, where he has seen mild success.

Ferrari are sponsored by Hublot and the brand of watch that Kimi Räikkönen is seen wearing. The watch is a Hublot Big Bang Ferrari Ceramic Carbon Mens Chronograph ref 401.CQ.0129.VR. The watch celebrates the fruitful relationship between the two famous brands and is limited to just 1000 pieces. The timepiece is rich with attractive aesthetic details and exudes much of the same qualities as a Ferrari – impeccable looks with a sublime technical engine underneath.

With the yellow details and luminous emphasis, the spectacular dial with Ferrari logo at 9 o’clock is made from forged carbon and ceramic and encased in a 45mm round ceramic case. The calibere HUB1214 movement is an automatic fly-back chronograph mechanical movement with a power reserve of 72 hours. The piece is finished off with a black calfskin leather strap with yellow thread stitching and a titanium insert deployment buckle clasp. 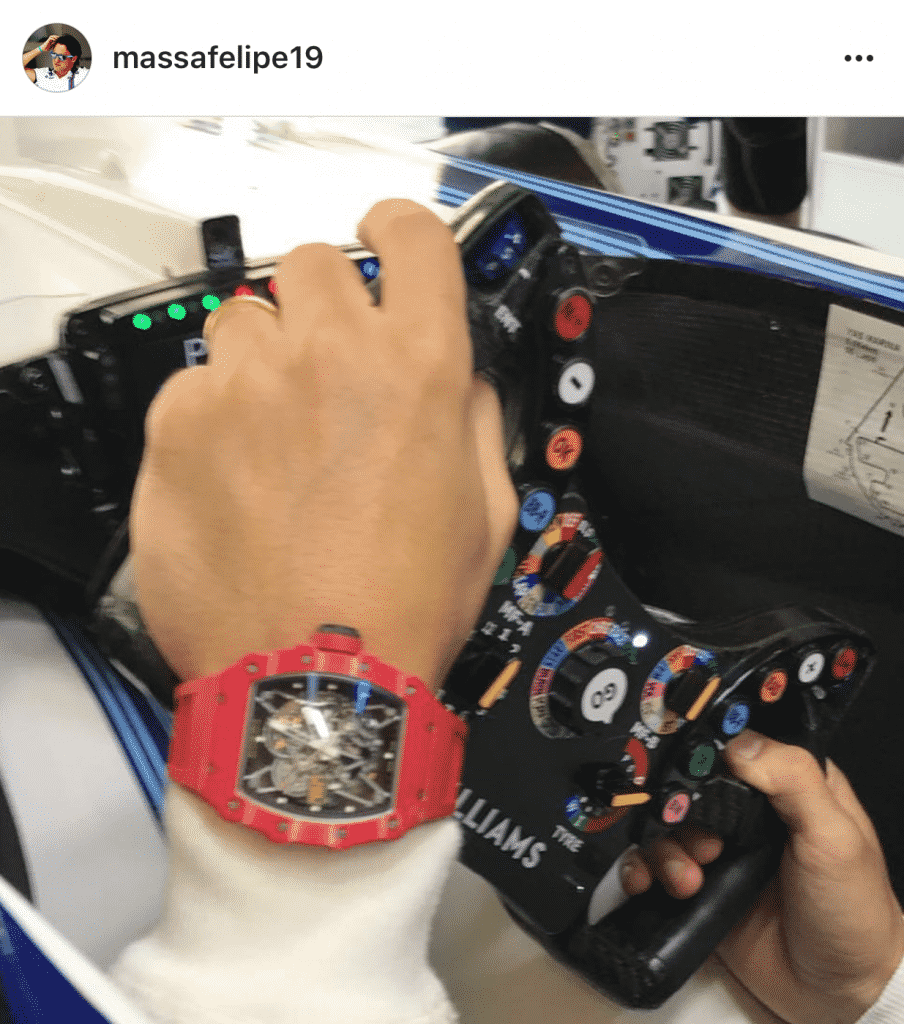 The Brazilian king of Formula One has been a familiar face in the sport for a number of years, and is considered to be a fan favourite. Mass is sponsored by the luxury watch brand Richard Mille, and as such is spotted here wearing the fabled RM 035-2 Rafa Nadal Red Quartz.

The RM 035-02 was simply born out of requests from customers for a self-winding mechanism at the hear of a Nadal calibre. The stunning 50mm case is available in either NTPT Carbon – the exclusive material with a unique appearance – or the bright Quartz-TPT Red (as pictured) with white highlights. Both materials have exceptional stability and resistance.

The RM 035-02 is includes their patented variable geometry rotor which makes it possible to adapt the winding to the user’s activity level. In more practical terms, the winding process is sped up in the case of minimal arm and hand movements, and slowed down in intense activity. Another marvel for this watch is the inclusion of a sapphire crystal casebook, which allows the movement to be admired from all angles. The watch is a true watch of a champion. 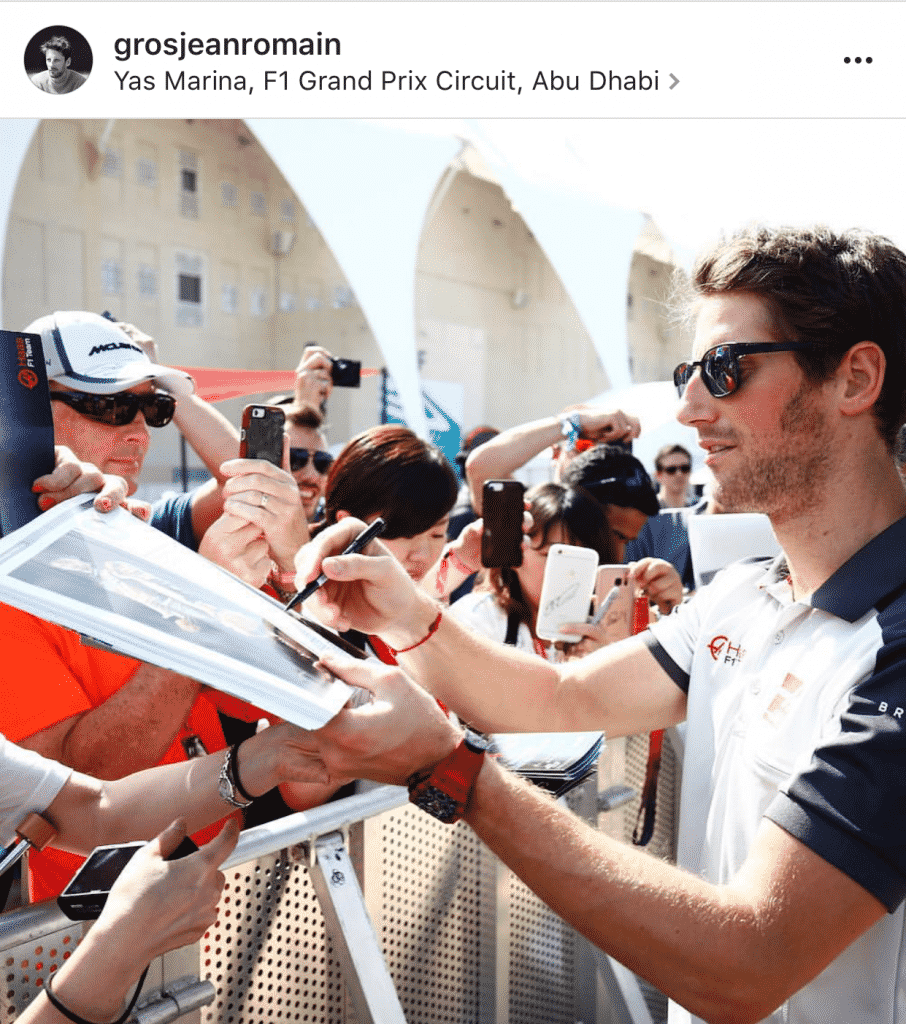 The young up and coming Romain Grosjean has been in Formula One for some time now and again a steady name in what people recognise with Formula One. The Franco-Swiss driver is now racing for Haas F1 Team, after previously driving for Renault. Once again, Grosjean is sponsored by Richard Mille and therefore is seen here with the very stylish RM 011 Red QTPT model.

The watch is of exceptional quality, coupled with its RM 011 automatic Flyback chronograph calibre. Richard Mille has created the incarnation of its TPT Quartz case dressed in vibrant red. The case is incredibly special, its silicon layers – each no thicker than 45 microns – are treated with a red resin that has been specially created for Richard Mille.

The watch is incredible rare, being limited to just 50 pieces worldwide and only available through Richard Mille boutiques. 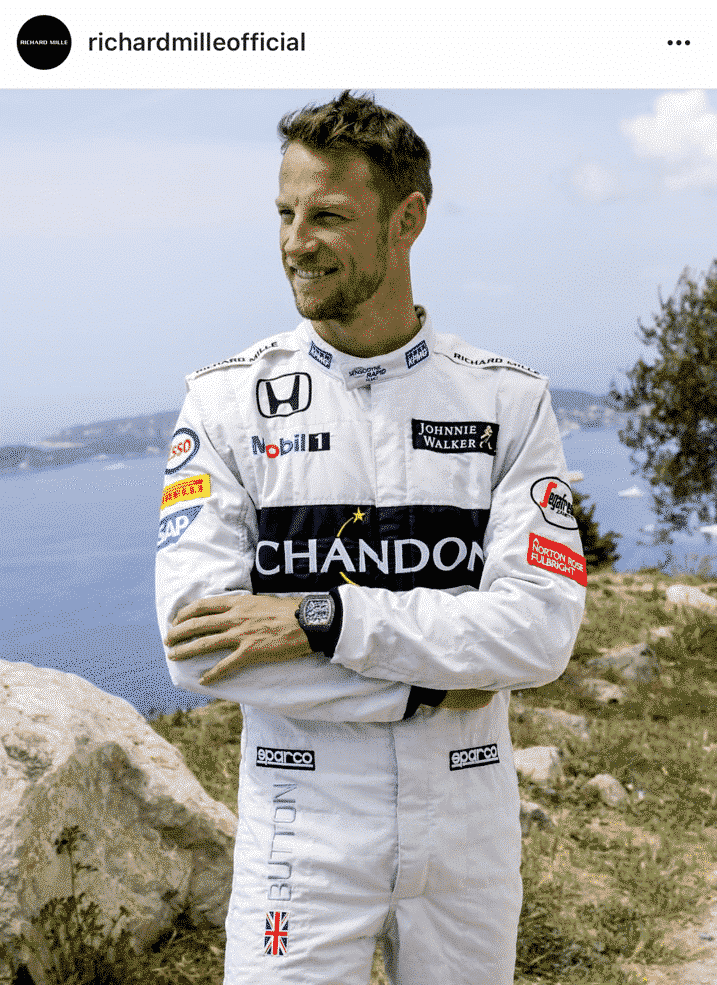 The immensely popular British racing driver Jenson Button has been a long standing fan favourite for a number of years, and won his first championship in 2009 driving Brawn GP. At the end of the 2016 World Championship, Button announced that he would give up his McLaren-Honda seat and would retire form the sport in 2018.

Jenson Button is widely considered to be a watch collector and as such has been spotted with some exquisite pieces. Here the British driver is wearing a Richard Mille RM 011 Black Night watch. Just like its brothers, the watch features a large date window at the top of the dial, a smaller month display at 4-5 o’clock and a chronograph function with centred seconds and 2 off-centred displays left and right of the centre.

The case is made from the signature NTPT Carbon from Richard Mille, and is 50mm in diameter. The carbon is exceptionally strong and light and composed of multiple layers of parallel filaments obtained by dividing carbon fibres. NTPT is also used for the crown and the pushers. The watch is finished with sapphire crystal display glass and caseback and matched with a black rubber strap with black DLC titanium buckle.

The Watches Of Formula 1: A Series Of Drivers and Their Watches – Part One