Greatest Luxury Watches: 5 Watches To Buy If You Had Unlimited Resources

This article is an in depth look at some of the greatest pieces when it comes to luxury watches. This is far from a buying guide, as not many people can fathom, or justify, spending the sort of money these pieces are worth. If you take a step back, however, you’d be able to look at the following timepieces as works of art, or technological advances in horology. I’ve compiled a list of 5 of my favorite watches that I’d buy if money were no object. Some people may not agree with these, and that’s fine as it’s subjective and reflects my personal opinion. There were plenty more that could’ve made the list, but here it is: 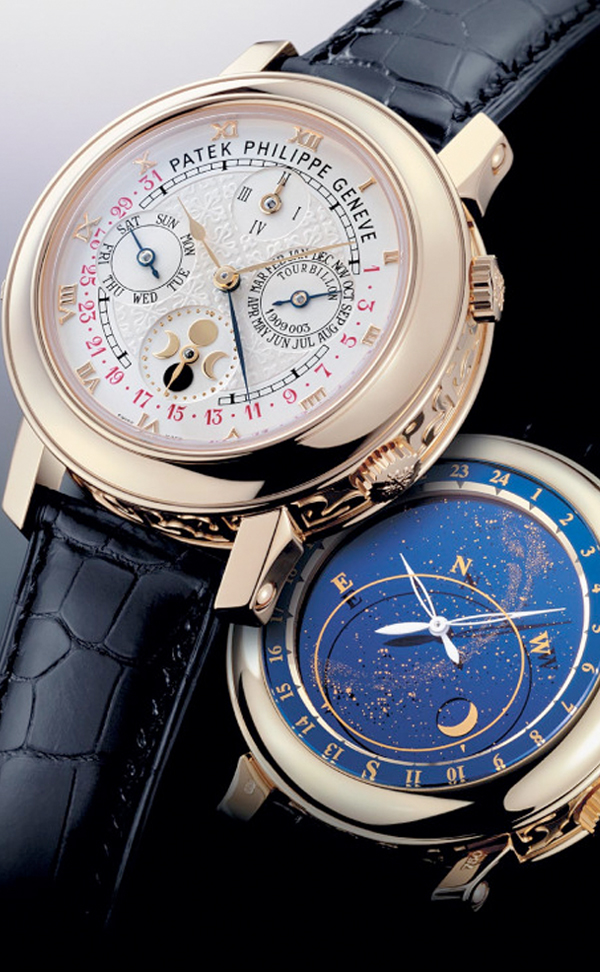 1. Patek Philippe "Sky Moon" Tourbillion - $1.2-1.3 Million One of the most complicated wristwatches ever made by Patek, the "Sky Moon Tourbillon" is one of the most sought after watches for any serious collector. From its crazy complications to the stunning design, it was impossible to look past this incredible piece for the number 1 spot. There are two variations of the Sky Moon, the 5002 (the original) and the 6002. I'll focus on the 5002 as it is my personal preference out of the two. What makes this watch even more special, is that is has two faces. Not only that, but it's one of few two-faced watches that does it well. The watch was made available in gold and platinum, with the latter being a bit more expensive. The case is 42.8mm wide and pretty dense - I guess it'd have to be to house all 13 complications! One side of the watch features the time, perpetual calendar and moonphase. Also included is a Tourbillon function, which is hidden inside the movement just how Patek Philippe usually do it. There is also a minute repeater which can be activated on the side of the case. The second face is the more unusual looking, and also includes some interesting functions. It has the sidereel time, the normal time, sky chart, and the phase and orbit of the moon. Even though these indicators aren't useful to many people, it is a nice gimmick and the face does look cool. 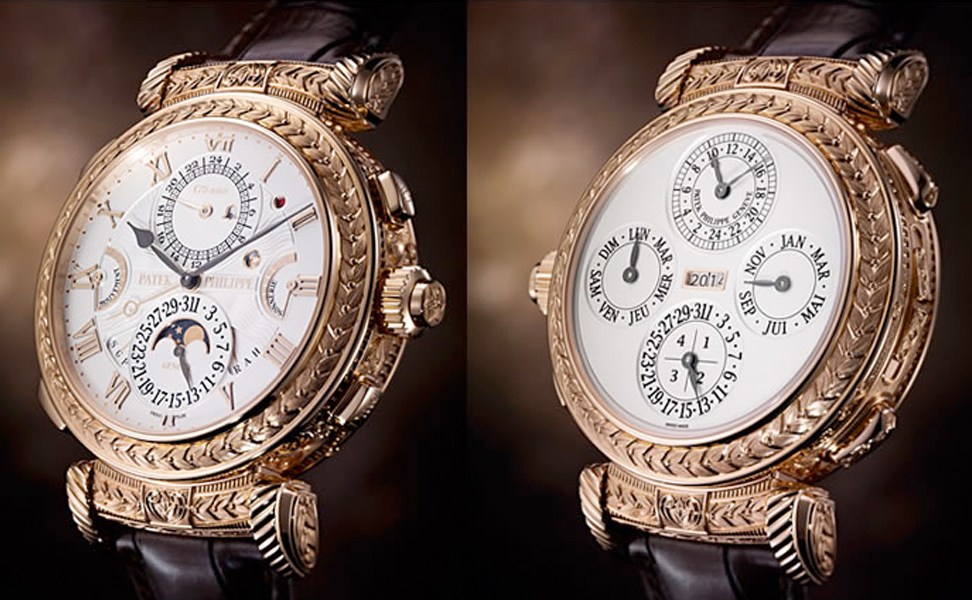 2. Patek Philippe Grandmaster Chime 5175 - $2.6 Million You are looking at the most complicated wristwatch ever created. The Grandmaster Chime. This watch was released in 2014 to celebrate 175 years of Patek Philippe, and they certainly haven't let us down with it. What makes this the most complicated wristwatch ever? Well, it blends chiming complications like the grande and petite sonnerie (hence the name chime) with more recent advances such as the date repeater, whilst incorporating a state-of-the-art perpetual calendar. For it's 150th anniversary, Patek released the Calibre 89 pocket watch, which was the most complicated watch ever produced at the time. The watchmaker certainly takes it's anniversaries seriously, and this watch is the best example of that.The Grandmaster Chime has certainly eclipsed the Calibre 89 pocket watch, with such unusual complications such as a dial that shows the date of Easter. The appearance, however, is a completely different story. When you look at this piece, you know you're looking at a watchmaking masterpiece. The case is made of 18K rose gold and is massive, with a size of 47.4mm and as thick as 16.1mm. The watch simply spins between the massive lugs, allowing you to switch between both dials. To top it off, the Rose Gold is hand engraved to give it an almost Oriental look. Inside the watch, the movement is amalgamated of (only) 1,366 separate components. It's figures like these that makes the next fact a bit easier to comprehend; it took 100,000 hours to conceive and build this watch. There are 20 different complications to this watch. Here's an overview:

"How many of these are useful to me?" I hear you ask. Well, not many. Despite this, you can't knock the innovation and technicality crammed inside of this watch. The Grandmaster Chime will be limited to 7 pieces, 1 of which will be housed in the Patek Philippe museum in Geneva. I also wrote about this watch when Patek Philippe hosted an exhibition at the Saatchi Gallery, London. 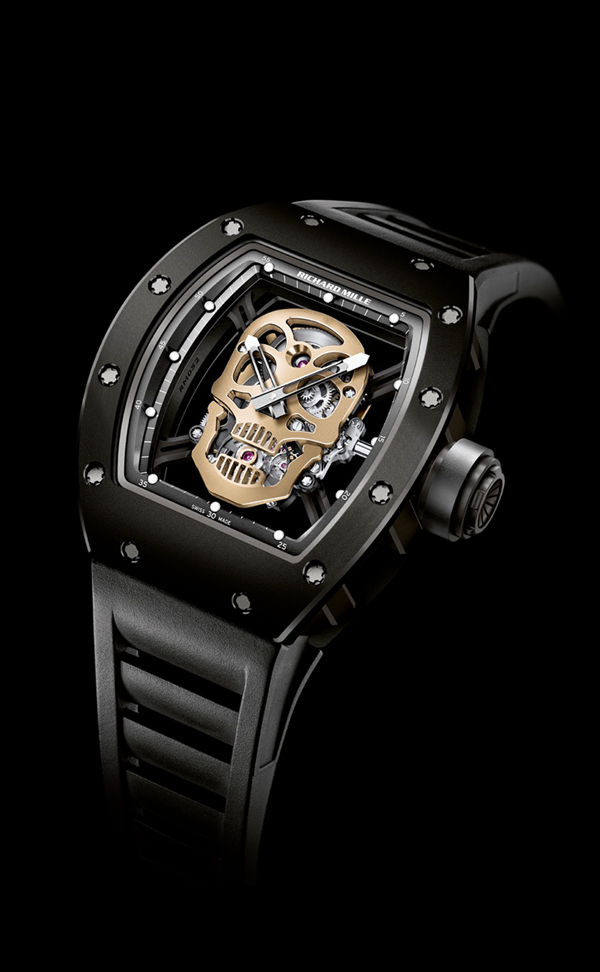 3. Richard Mille RM 052 Tourbillon Skull - $595,000 The RM 052 Tourbillon Skull is a wonder to behold when it comes to appearance. This is different to the Patek pieces as it isn't packed with different complications. It's quite simply a stunning watch to look at, and comes with some interesting, innovative quirks. This isn't quite in the same price bracket, however, as it is valued at $595,000 USD new. Nevertheless, it is still a truly great timepiece, and one that deserves its place on the list. Richard Mille adhered to tradition with the piece, by limiting the piece to 30 (similar to some other models they've released in the past). One thing that makes this watch special, amongst other things, is that it features a unique TZP ceramic bezel. Richard Mille love to be innovative with the materials used to create their watches, and haven't shied away here. What is fascinating about this material is the upwards brushed effect it has given the bezel, a real aesthetic treat. Richard Mille have stuck to the brand's values by including five-point star screws on the case; the over-sized crown with rubber ring and the classic 'tonneau' shaped case. Located in the middle of the watch is quite literally the centrepiece of the watch. There sits a solid red gold skull, with a tourbillon complication sat strategically inside the jaws. The skull appears to be be floating in the centre of the dials as it is held by four bridges which resemble the bones part of a skull and crossbones. As well as this, every break in the skull allows a deeper look into the RM 052 calibre movement inside the watch. The watch is attached to a black rubber strap with double-folding clasp and rectangular openings along the area where the strap meets the case. Similarly to other Richard Mille models, such as the 'Rafa Nadal', the watch wears incredibly light and extremely comfortable. 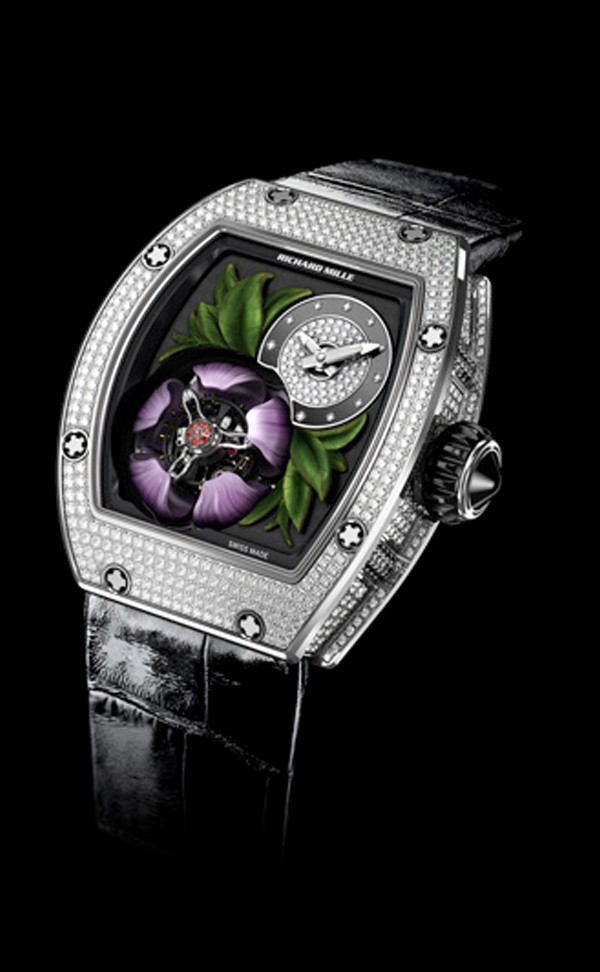 Richard Mille is a luxury watch brand that focuses it's models on a male audience, so it's understandable to be caught by surprise when you see the RM 19-02 Tourbillon Fleur. The designers over at Richard Mille aimed to create a watch for women with an interest in mechanical watches, and boy have they delivered. The most undoubtedly interesting thing about this watch is located at 7 o'clock: a hand-painted magnolia that opens and closes to reveal a flying tourbillon. The coolest thing about it is that it open and closes in rhythmic regularity every 5 minutes, and can be open and closed at the desire of the wearer by pushing a tiny button at 9 o'clock. Another awesome feature added was that the tourbillon feature actually mimics nature. The tourbillon actually rises 1mm out of its gem-set stamen (actually the pinion) in order to mimic a flower rising up towards the sun to increase chances of pollination. As you can see from the image above, the case is diamond studded. Richard Mille, however, have never disclosed how many diamonds were used, or to what quality. Even the centre of the tourbillon has been set with stones. The size of this watch is on the large side for a ladies watch, although the shape of the case means women will most likely be able to get away with it. Similarly to the Richard Mille RM 052 Tourbillon Skull, the Fleur is limited to 30 pieces and has a hefty price tag of $1.3 million. Don't be fooled by the flowers, this is a serious timepiece. 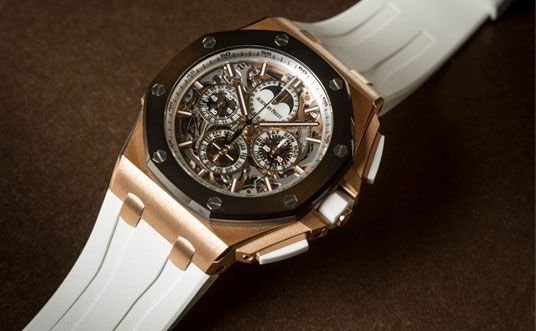 Audemars Piguet have been making grand complications since longer than pretty much any other watchmakers, since 1882. This watch really does optimise the words grand and complicated in every sense of the words. The massive Caliber 2885 movement is comprised of 648 parts, and is 32 millimetre wide and 8.55 millimetre thick. As for the complications it includes, there are a few to note. Firstly, it offers a chiming mechanism (a minute repeater with two gongs), a perpetual calendar that includes the date, day, month, phase of the moon and leap year indications, as well as a stopwatch function which in this case is a 30-minute chronograph with a rattrapante complication. Despite the awesome complications found inside this watch, you can't help but look past them and just admire the aesthetic beauty of this watch. What this watch does well is blend a high level of watchmaking complexity with a sporty look. Despite the rugged look, however, a watch with such a delicate movement should not be used for swimming or climbing. This timepiece has a water resistance of 20 meters, which is one notable difference from many other Offshore models. This low water resistance does have a good reason reason behind it though. Whilst there are currently a number of ways to waterproof a crown and the two chronograph pushers, it becomes considerably more difficult trying to seal the minute repeater's slider on the left side of the case, as well as the push-piece in the centre of the crown. Despite this, the watch is similar to most Royal Oak Offshore models in that the 18-carat rose gold case in 44mm wide and 15.70 thick. Each part included in this watch has been finished beautifully and to the highest standard. It's really what you'd expect from a watch that takes 6 months to manufacture and will cost more than most super cars. There are a few variations of this watch, however the rose gold with white strap, pushers and crown is my personal favourite design.