You didn’t misread that title, Richard Mille have released a luxury watch with a function to spice up a couple's love life. The watch is named the RM 69 (oh come on...) Erotic Tourbillon. This isn't the only erotically-inspired watch ever made, and probably not the last. The most (in)famous pieces are jaquemarts, a watch that showed animated sexual acts whilst chiming the actual time. Richard Mille watches have gone beyond nice looking pieces with a complicated movement. They have built watches that compliment the wearer and can be used in the real world. This was shown when Rafa Nadal wore his Richard Mille on court. It seems like the mission is to create watches with a real purpose. So, where does the RM 69 fit into all of this? Well, it's quite simple really. If you look past the eroticism, they have simply created an interactive toy that you can have a bit of fun with. The piece shows you have great taste in watches, a sense of humour, and allows the wearer to have a conversation starter on his wrist.

Such a tongue-in-cheek name is certainly fitting for such a bizarre watch. It certainly appears to be a Richard Mille watch, with same the same classic tonneau shape and 12 screws in the bezel we've come to love and admire from Richard Mille models. It takes some time, however, to notice this when you have the words "I WANT TO CARESS YOU MADLY" sprawled across the face of the watch. Richard Mille watches have taken me by surprise in the past, but always for many different reasons. The RM 69 was designed to allow the wearer to use his watch to decide which acts he'd like to perform with his partner at that moment, or in the very near future. In order for this to happen, the RM 69 relies on a hand wound, mechanical movement, made up of 505 parts. As well as this, there are three titanium rollers as part of its "oracle" complication. Each roller has 6 sides, all engraved with random (sexual) phrases. The fun really starts when you imagine how many unique combinations you can achieve with that. Richard Mille are keeping the full list of phrases a secret in order to make it more special for potential buyers. The ones we do know from various images are: Let me; I long to; i need to; explore; taste; kiss; arouse; you tonight; your lips; your nipples. In order to display a new phrase, the user must push the button at the 10 o'clock position. 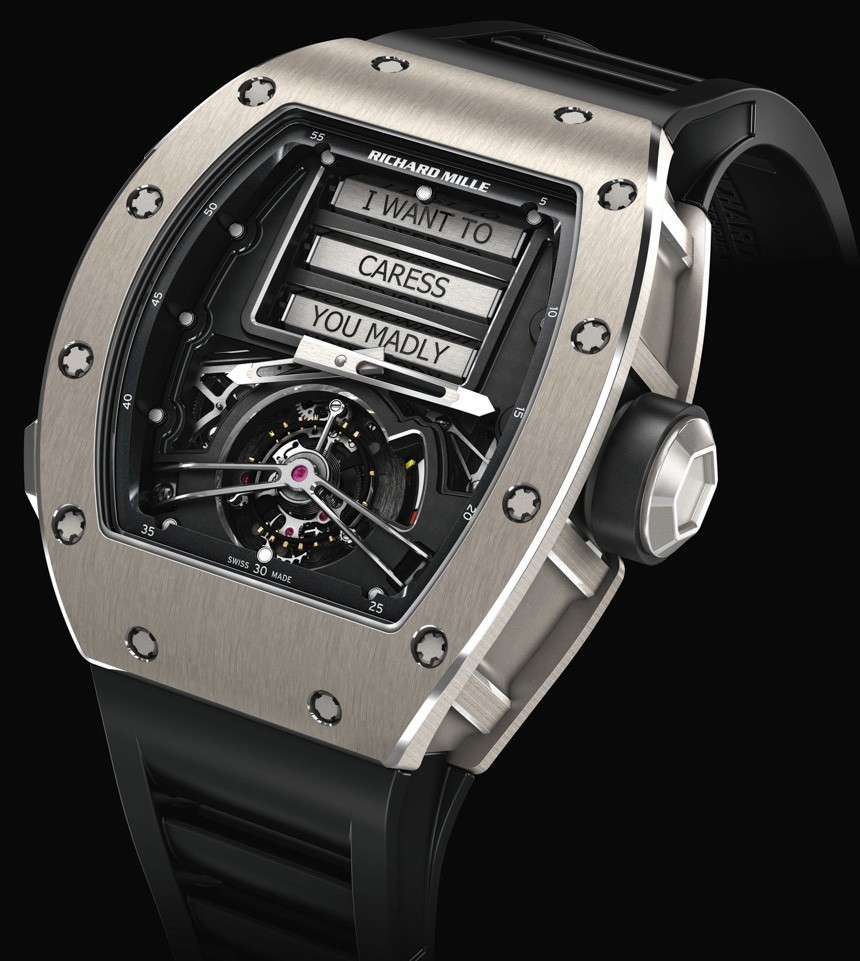 But despite this, the watch hides some truly innovative features which alone could still create quite a buzz amongst the world of horologie. Just like pretty much all high-end Richard Mille movements, the caliber was designed in collaboration with Audemars Piguet Renaud & Papi. Firstly they had to create a movement that left enough space for a large roller. APR&R had to fit the tourbillon and the mainspring onto the same axis, but had to be fitted on two different layers - a construction called a "Duoplan". 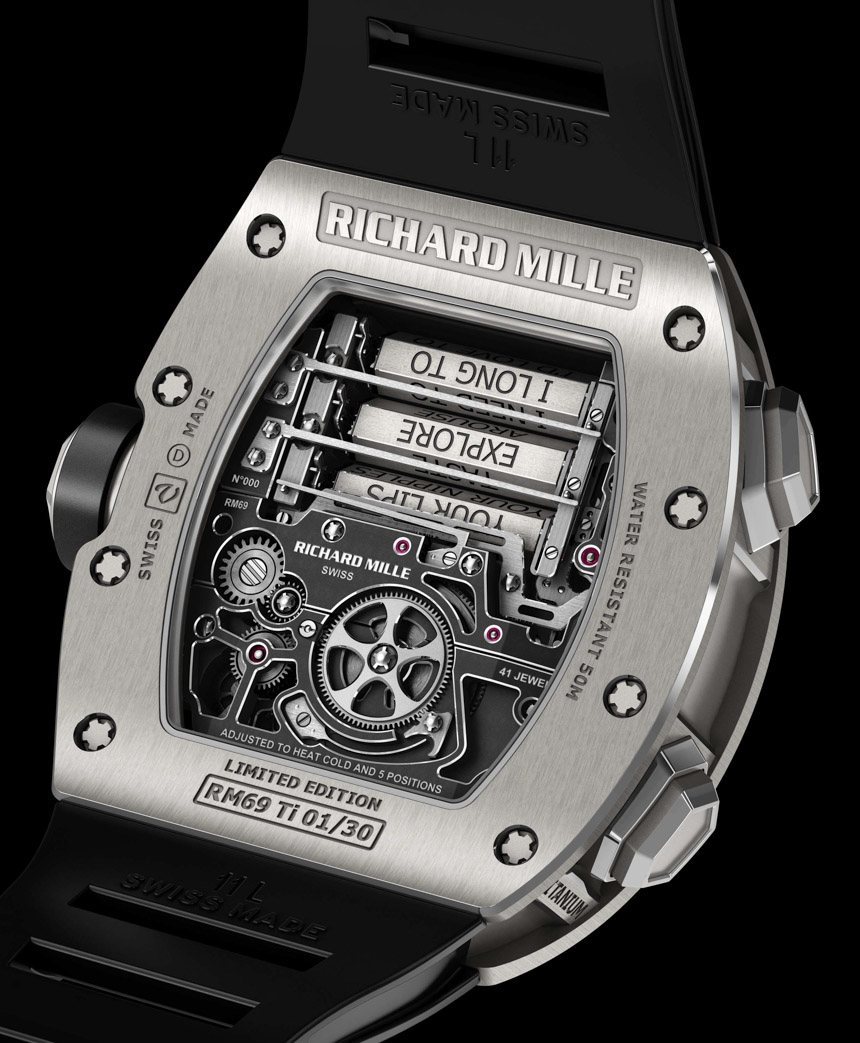 The fact this watch packs a tourbillon function and a 69 hour power reserve into such a tiny space, as well as a time-suspending complication is pretty staggering. The watch is house in a grade 5 titanium case and measures at 50 by 42.70 by 16.15mm.

The price for this piece that is limited to 30 has yet to be released.